Details
Written by Allan Pulker
Category: Early, Classical and Beyond
Published: 05 May 2020 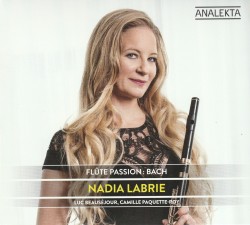 Only one of the compositions on this recording is actually a solo, the Partita in A Minor, which flutist Nadia Labrie plays with energy and assurance. I particularly appreciated her approach to the only slow movement, the Sarabande, as a reflective and perhaps melancholy soliloquy, which she plays with feeling but never with sentimentality.

Two of the other three sonatas on the CD are called flute sonatas but are in fact ensemble pieces. The Allegro fourth movement of the Sonata in E Minor is as much a virtuosic solo piece for the keyboard, on this modern instrument recording a piano, which Luc Beauséjour plays as the complete equal to the flute, a collaborator, not a supporting actor. This is also particularly evident in the final Presto of the Sonata in B Minor. Similarly the cello part in the Andante first movement of the same sonata can be heard as the other half of a duo with the flute, and is played that way by cellist Camille Paquette-Roy.

The G Major Sonata on the disc is a trio sonata, originally for two flutes and continuo. On this recording, however, Beauséjour plays the other “flute” part, leaving the bass line to the cello. While in a certain sense emancipating the cello, it somehow doesn’t work as well as a duo as, for example, the Allegro movement already mentioned.

Nevertheless, bravissimi to our three collaborators for a fine addition to the recorded ensemble music of Bach.