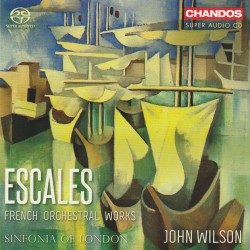 While the subtitle of this disc is “French Orchestral Works,” it could just as easily be called “Spanish Music from France,” for that is what comprises the majority of Escales’ contents. The opening and closing tracks are Chabrier’s España and Ravel’s Rapsodie espagnole, clearly evoking a strong Spanish influence, while Ibert’s Escales outlines a three-part journey from France, through Italy, to Spain. Between these works are more standard essays in 20th century French composition, with such classics as Debussy’s Prélude à l’après-midi d’un faune and Massenet’s Méditation.

The interesting subtext to this disc is that, although the Spanish-infused pieces are clearly and deliberately exotic and meant to sound Spanish, they are immediately recognizable as being French. Perhaps this is because the works themselves are only caricatures of another style, or perhaps because they are surrounded by more characteristically familiar music of the same school; regardless of the reason, this disc makes a strong case for France’s inherent national musical identity through its composers.

The Sinfonia of London are fine interpreters of this rich and lush material, coaxing out the timbral subtleties of each composer’s material. From the tranquil openings of Debussy’s Prélude to the driving conclusion of Ravel’s Rapsodie, the character of this music is expressed to full effect, aided in large part by the terrific quality of the sound itself. Released as a super audio CD, Escales captures a high degree of sonic detail, such as the robust spectrum of overtones produced by the divided string section, and translates these into a product that is remarkably close to a live performance in a concert hall, ideal for these colourful impressionistic works.