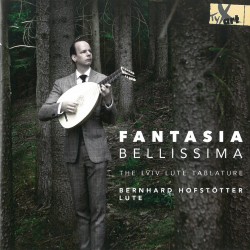 As if you hadn’t heard enough about Ukraine in the news lately, this superb disc features premiere recordings from the so-called Lviv Lute Tablature, named for its current location. The booklet includes excellent notes on this interesting source by Dr. Kateryna Schöning -- though I believe she may be mistaken when she states that “besides two lost sources… the manuscript is the only lute tablature from the Polish-Lithuanian region.” Canada’s own Magdalena Tomsinska of Waterloo edited the Gdansk Lute Tablature MS 4022 and recorded selections in 2014.

Beyond just music, the source’s 124 folios also contain Latin aphorisms, graphic patterns and other visual ornaments, as well as some Polish poetry. The manuscript’s music comes from a variety of different nations, composers, and time periods. On the disc you’ll find pieces from the early 16th century, such as Joan Ambrosio Dalza’s Pavana alla Ferrarese, yet also two fantasias by John Dowland which were composed towards the end of the century. This makes for a nice variety.

Bernhard Hofstötter’s lute playing is superb, as is the sound of his Renatus Lechner seven-course lute in the acoustic of the Landesmusikakademie Sachsen in Colditz Castle. The dance rhythms have articulation and buoyancy, the counterpoint clarity and grace. Chanson intabulations by Sermisy, Sandrin, and Jannequin are high points. However, purists should be prepared for what I assume is an off-book strum-fest in the anonymous Tarzeto which opens and closes the disc.