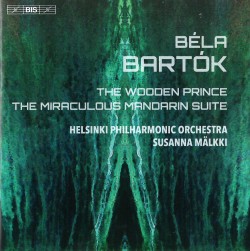 Who knows how Bartók would have fared had his ballet music been introduced in Paris around the time Stravinsky’s star was rising? This disc brings together his two most notable works in the category: The Wooden Prince dating from 1917, and more celebrated, The Miraculous Mandarin from1924 (revised final version 1927). One can’t help thinking sadly of how different the two men’s lives were following the end of the WWII, and how a penniless genius like Bartók deserved better.

The earlier work follows the plot of a fairy tale of love triumphing over various obstructive enchantments. Its music alternates between melodrama, ferocity and cheeky sprightliness. By contrast, the second work on the disc is anything but a fairy tale. It is a story of seduction and violence, and a supernatural character who is impervious to the latter as long as he resists the former. Where the music of the earlier work is folk-infused and tuneful, the latter is a glimpse of the modernist Bartók. As a suite, The Miraculous Mandarin clocks in at barely 20 minutes. The Wooden Prince is presented in its entirety, lasting just under an hour.

The wonderful Helsinki Philharmonic under Susanna Mälkki explores the score with flair and finesse. For my money, the more interesting piece is the darker later work, and not only because of the iconic clarinet duets that depict the three seduction scenes, although these are brilliantly performed. For those unsure they can bear the mysteries of Bartók, the first offering is an excellent warmup.