Details
Written by Max Christie
Category: Early, Classical and Beyond
Published: 30 May 2019 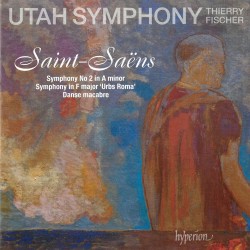 Is Camille Saint-Saëns an undervalued or unjustifiably obscure composer? An answer is proposed in the recording and accompanying liner notes released by the Utah Symphony under Thierry Fischer. The argument presented suggests both are true, with the second being attributed to the fact that his later compatriots such as Fauré (student of the master) and Debussy gathered more attention while his own material was overlooked by conductors and thus by the musical public. His elder, Berlioz, famously summed up the young composer thus: “He knows everything, he lacks inexperience.”

Two symphonies form substantial brackets to a rousing rendition of Danse macabre (with violin soloist Madeline Adkins). Symphony No.2 in A Minor, Op.55 opens the disc. At just under 23 minutes, the work is modest, beautifully structured and completely delightful. The scherzo movement is what Saint-Saëns should be known for, wit and agility.

Saint-Saëns no doubt felt that seriousness and long-windedness were the province of the Germans, or maybe he was atoning for the heavy-handedness of his previous effort: Symphony in F Major “Urbs Roma” (the subtitle was the pseudonym required by the terms of the competition in which it was entered). This is a more ponderous work, nearly double the length of Symphony No.2 and lacking the inspired brevity of the latter. One almost hears the composer ticking the boxes beside all the elements he knew would sway a jury on Bordeaux, and he was right; the piece took the prize, but remains on the shelf today.