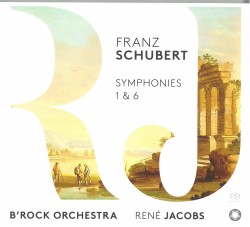 This new recording of Schubert’s First and Sixth Symphonies is René Jacobs’ first foray into the music of this composer and it certainly promises to be an exciting new adventure. Thus far I have been acquainted with the Belgian maestro as a distinguished interpreter of Baroque repertoire, but as is usually the case with extraordinary musical minds, they soon branch into the classics or even the Romantics.

Schubert was the first love of my life and I grew up with the lush and graceful interpretations of German conductors, beautifully rendered with modern instrument orchestras. Little did I know that Schubert’s original scores were augmented by Brahms, so Jacobs’ principal aim is to restore authenticity with the original, leaner orchestrations with period instruments using the B’Rock Orchestra, a group of young enthusiastic and energetic players famous for their original approach to the classics.

Notwithstanding some critics’ complaints about harsh sounds, extreme dynamics and sonorities of period instruments, we are amply compensated with how even the First Symphony, written by a mere teenager, dashes forth with such verve, fire, joie de vivre, brilliance and humour at the hands of these young players. The fourth movement especially, is a delight.

The Sixth, my favourite from the early period, referred to as the Little C Major (as opposed to the Great C Major) is definitely a masterpiece and comes off even better. Everything makes sense, the extremely fast tempo at the ritornello of the Scherzo and its heavenly Trio, that marvellous second movement with its sudden outbursts of sadness and anger, the delightful fourth that dances along like a ballet with its interesting modulations, and that surprising sudden visionary reference to the great Ninth at the very end. A vigorous, original and highly inspired performance!