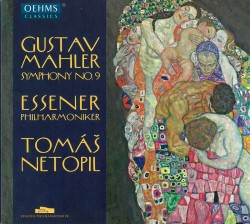 The city of Essen is located at the heart of the industrial Ruhr area of Germany. Its rise to prominence is intimately tied to the fortunes of the Krupp family dynasty, who settled in this coal-rich region some 400 years ago and began building steel foundries mainly dedicated to the manufacture of heavy artillery. Gustav Mahler conducted the premiere of his sixth symphony there in 1906, prompting the Viennese critic Hans Liebstöckl to acerbically observe, “Krupp makes only cannons, Mahler only symphonies.”

Throughout the 20th century the orchestra maintained a low profile labouring under a series of provincial kappelmeisters. Judging by the present performance under their current director, the Czech conductor Tomáš Netopil, this highly capable orchestra makes a compelling case for greater international renown. Recorded in Essen’s Alfried Krupp Hall in April 2018 (from what I assume are edits of live performances), for the most part this rendition of Mahler’s Symphony No.9 is quite a revelation. Only the interpretation of the droll second movement Ländler shows a few interpretive seams, as Netopil sentimentalizes the structural ritardandos by consistently beginning them far earlier than indicated in the score. By contrast, the vehement pacing of the accelerandos towards the end of the subsequent daemonic Scherzo are electrifying. The cataclysmic first movement receives an immensely powerful performance, while the finale achieves a Zen-like transcendence superbly conveyed through the carefully modulated tone of the dark-hued Essen string section.

Too much is made in the liner notes of the allegedly “fateful” nature of this work, begun in 1909, two years before Mahler’s demise. Death, with few exceptions, was always a leitmotif in his works. It is not death, but life and love that make this work so exceptional.