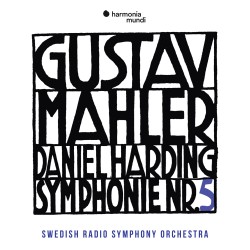 Mahler’s Fifth Symphony has proved itself to be one of his most often performed works, musically challenging yet accessible enough for even student orchestras to perform with aplomb. Scored for a relatively normal-sized orchestra and relatively Apollonian in comparison to his more Dionysian and ofttimes programmatic earlier symphonies, it marks a progression towards an exclusively instrumental and often elaborately contrapuntal approach characteristic of his middle period symphonies.

Daniel Harding, a protégé of eminent Mahlerians Simon Rattle and Claudio Abbado, leads a revelatory performance of this work with the superb Swedish Radio Orchestra, an ensemble he has directed since 2007 and to whom he is contracted through 2023. The esprit-de-corps he has established with the ensemble is palpable in this sumptuous and expertly edited recording, captured in all its glory by a crack audio team from Teldex Studio Berlin. It is sadly rare these days to come across a proper studio recording of this quality. No nuance goes unnoticed in this finely wrought and vigorous production.

Harding’s interpretation is eminently idiomatic and the orchestra is quick to respond to his beck and call. As an example among many wonderful moments I was struck by his handling of the exuberant Rondo-Finale, in which the many tempo changes are elegantly transitioned by establishing a long line that drives towards the conclusion, surmounting the sectional stopping and starting that often mars lesser performances. The celebrated Adagietto movement for strings and harp is equally effective; it is languorously timed at 10 minutes and 30 seconds yet never feels overwrought, as the string section’s vibrato is carefully restrained to something resembling a period performance. A truly admirable achievement for all concerned!