It’s been quite a while since the terrific 2012 debut CD of Toronto’s Windermere String Quartet, but their second CD release turns out to have been well worth the wait. The ensemble’s name is usually followed by “on period instruments,” but their repertoire has never been restricted to works from the Classical period and their regular concert series frequently features world premieres of new works by Canadian composers.

Their sophmore CD, Inner Landscapes (Pipistrelle PIP 1216) follows this same pattern, with Beethoven’s Quartet in F Minor Op.95 and Mendelssohn’s Quartet in A Minor Op.13 acting as bookends to Traces of a Silent Landscape, a 2011 work by Canadian composer Robert Rival that was commissioned by the quartet.

The Beethoven and Mendelssohn works both receive exemplary performances, with intimate and sensitive playing that never lacks strength and power when needed. The Mendelssohn in particular has an achingly beautiful slow movement and a simply dazzling Presto. All the hallmarks of this ensemble’s playing are here: a judicial use of vibrato; delicate nuances; excellent dynamics; finely judged tempos; and an overall balance that always allows the identity of the individual instruments to be clearly felt.

The Rival quartet, which was inspired by a snowshoe trek in Algonquin Park in the dead of winter, is a striking and very effective work, quite modern in style but with clear traditional roots. One gets the immediate impression that the quiet, wispy nature of the music is not only perfectly suited to the particular sounds that these period instruments produce but was also inspired by them, a feeling confirmed by the composer, who says that while composing the work he had in mind “…the subdued, airy quality of gut strings and the sparing use of vibrato, in particular.” The delicate ending of the final Forest’s lullaby is quite stunning.

Rival also paid tribute to the two works with which his new work would be premiered – and which accompany it on this CD in a re-creation of that recital – by starting with a slow fugue; both the Beethoven and Mendelssohn quartets incorporate fugues in their slow movements.

What continually impresses me about this ensemble is the way they can convey depth, conviction and an emotional range and intensity without ever overwhelming you with either volume or gesture. It’s very easy to imagine that the Beethoven and Mendelssohn works sounded like this at their premieres, but very difficult to imagine that they sounded better.

Recorded at the wonderful St. Anne’s Anglican Church in Toronto’s west end with the always-reliable Norbert Kraft as engineer, the sound is exemplary, catching every delicate nuance in another outstanding CD from the Windermere players. Hopefully we won’t have to wait another five years for their next one. 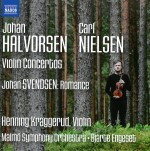 Given his wonderful playing on the Mozart concerto DVD reviewed here last month, I was delighted to see that this month’s offerings included a new CD of Henning Kraggerud playing Nordic Violin Concertos with Bjarte Engeset conducting the Malmö Symphony Orchestra (Naxos 8.573738). The Violin Concerto Op.28 by Johan Halvorsen is paired with the Violin Concerto Op.33 of Carl Nielsen, with the well-known Romance of Johan Svendsen completing the disc.

The concerto by the Norwegian Halvorsen (1864-1935) has an interesting story. He was an outstanding violinist and a self-taught composer, and his violin concerto was introduced by the 18-year-old Canadian violinist Kathleen Parlow in the Netherlands in 1909. After only a handful of performances by Parlow the work was not played again during Halvorsen’s lifetime. When he retired in 1929 he destroyed several of his manuscripts, his wife stating after his death that she believed the concerto to be among them. But in 2015 the score and parts were discovered in Parlow’s papers in the University of Toronto’s Faculty of Music Library, where they had resided since 1963. Kraggerud gave the first modern performances in Norway last July, making this world premiere commercial recording in Sweden a short while later. It’s a lovely work, full of lyrical themes and redolent of Norwegian folk music, with more than a hint of Hardanger fiddle music. The solo part is technically demanding, but Kraggerud is clearly in his element with a work which will hopefully find a place in the regular repertoire.

The Nielsen concerto, written just a few years after the Halvorsen in 1911, continues to be a work which should be much better known, but hopefully this is changing, Haggerud’s terrific performance here coming not long after Baiba Skride’s equally excellent 2015 recording.

A lovely performance of the Svendsen Romance rounds out an outstanding CD. 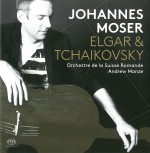 If you love the Elgar Cello Concerto then you should really try to hear the new Super Audio CD Elgar & Tchaikovsky from the outstanding cellist Johannes Moser with the Orchestre de la Suisse Romande under Andrew Manze (PentaTone PTC 5186 570). Moser is simply superb in the emotional work that essentially marked the end of the 62-year-old Elgar’s compositional activity. Written in 1919, it is essentially a lament for the composer’s Edwardian world that was destroyed by the First World War, and Moser beautifully captures the very soul of the music.

Moser notes that both Elgar and Tchaikovsky were looking back to a brighter past – Elgar to the pre-1914 world and Tchaikovsky to the music of Mozart, using an original theme written in Mozartian style as the basis for his Variations on a Rococo Theme Op.33. It’s the original version that is performed here, and not the modified and altered version by the cellist Wilhelm Fitzenhagen that constituted the original 1877 publication and is still frequently heard in the concert hall. Moser’s performance makes you wonder why anyone would ever want to hear the Fitzenhagen version again.

Three shorter Tchaikovsky works for cello and orchestra complete the CD. The Nocturne from Six Pieces for Piano and the famous Andante cantabile from the String Quartet No.1 were both transcribed by the composer, and the Pezzo capriccioso Op.62 is a lovely original work.

Manze and the orchestra supply great support throughout a simply lovely CD.

There’s more excellent quartet playing on Landscapes, the latest CD from Germany’s Schumann Quartett in a program of works by Haydn, Takemitsu, Bartók and Pärt (Berlin Classics 0300836BC). It’s clear that these are works that the quartet – brothers Erik, Ken and Mark Schumann and Estonian violist Liisa Randalu – has played and cared about for some time.

Haydn’s String Quartet in B-flat Major Op.76 No.4, the “Sunrise” makes for a lovely opening to the CD, the emerging radiance of the opening particularly well captured. Landscape I by the Japanese composer Toru Takemitsu acknowledges the Schumanns’ family roots – their mother is Japanese – and is a somewhat bleak piece with a decidedly meditative stillness about it.

Bartók’s String Quartet No.2 Op.17 is an expressive post-Romantic piece written during the First World War when the composer was forced to take a break from his Hungarian folk-song collecting. The folk-music element is clearly present in a work dominated by an air of melancholy.

The final piece, Fratres, by the Estonian composer Arvo Pärt, was prepared with the composer and recorded in July 2016 in a church near the Estonian capital of Tallinn. It’s one of several instrumental versions of this very effective work.

The enigmatic Nigel Kennedy is back with another non-classical CD in My World, a program of his own compositions on the German label Neue Meister (0300878NM). Launched just over a year ago, the Berlin label features “…music by artists and composers who recognize no boundaries between the classical orchestra world, experimental art, electronica and pop music,” which should give you some idea of what this new release sounds like.

There are two distinct sections to the CD: Dedications, five pieces dedicated to the Polish musician Jarek Śmietana, Isaac Stern, Stéphane Grappelli, Yehudi Menuhin and Mark O’Connor; and Three Sisters, a suite of incidental music that Kennedy wrote for a run of the Chekhov play that his wife was producing. The Oxford Philharmonic Orchestra is listed on the CD cover, but it’s a bit misleading both from a participation and expectation viewpoint: the main musicians listed in the booklet are a six-piece guitar, bass and percussion combo, an oboist and an accordionist and anonymous Friends from the named orchestra.

It’s certainly the combo that seems to be front and centre most of the time, and even when there are strings present the sound seems to be more synthesized than live. There’s a clear jazz influence in the Dedications, along with the occasional melismatic Eastern feel, some pleasant melodic writing, and a rhythmic rock-fiddle drive in the number dedicated to O’Connor.

There’s a thicker orchestral sound with much the same feel throughout Three Sisters, but with added electronic effects and more of an improvisatory feel – one wonders just how much of the music was actually notated.

All in all, it’s typical Kennedy – spiky performances of varying effectiveness from a huge talent who simply refuses to follow what could be called standard career paths. When he gets away from the normal classical fare it tends to be hit or miss with him a lot of the time, and which category this particular CD falls under will probably depend on your own musical tastes.

Finally, there’s another recording of the complete Tchaikovsky Works for Violin & Orchestra, this time by the Korean violinist Moonkyung Lee on her debut Navona Records CD (NV6079) with the London Symphony Orchestra under Miran Vaupotić.

Her performance of the Violin Concerto in D Major Op.35 is a competent one which never quite reaches the heights, although the rather lacklustre contribution of the LSO under Vaupotić may well be a contributory factor; certainly the tempos tend to drag in places, and the orchestral balance tends to be a bit muddy and the sound quite dry. It’s a performance that just doesn’t take flight.

The other two works here – the Méditation in D Minor (the original slow movement for the Violin Concerto) and the Sérénade Mélancolique in B-flat Minor Op.26 – fare better, as the soloist’s rather dark tone is more suited to the slower tempos and the minor keys. Certainly the performances seem to get closer to the heart of the music.

The problem, though, is that given the fierce competition in recordings of these works – especially the concerto – a competent performance, while nothing to be sneezed at, will inevitably struggle to compete with the absolutely top-level recordings available.

The soloist’s instrument, incidentally, is the 1845 Vuillaume violin once owned by Jack Benny.