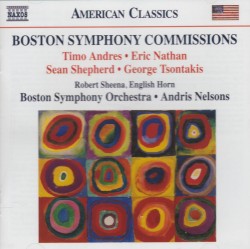 Four recent (2016-2017) works by American composers receive their premiere recordings on this disc.

The episodic structure of the brightly scored, 11-minute Everything Happens So Much by Timo Andres (b.1985) suggests, as per its title, a variety of things happening, as in a play, film or ballet. Similarly, the colourful episodes of another 11-minute piece, the space of a door by Eric Nathan (b.1983), also hint at a sequence of unseen events. Both of these compositions seem, to me, not quite self-sufficient, yet well-suited as soundtracks for something to be watched.

The 13-minute Express Abstractionism by Sean Shepherd (b.1979) invites visual accompaniment by its very nature. In four movements inspired by artists Alexander Calder, Gerhard Richter, Wassily Kandinsky, Lee Krasner and Piet Mondrian, Shepherd’s quirky, cleverly scored music would be even more persuasive if performed together with projected slides of the artists’ works.

The longest (24 minutes) and most substantial music on the disc, needing no visual support, is by the oldest and best-established of the composers, George Tsontakis (b.1951), visiting composer in 2008 at the University of Toronto’s Faculty of Music. His four-movement Sonnets – Tone Poems for English Horn and Orchestra, inspired by Shakespeare, is a lyrical, moody gem, its solo part beautifully played by the BSO’s Robert Sheena. It’s an English horn player’s worthy alternative to Sibelius’ Swan of Tuonela, which it closely resembles in overall impact, though boasting Tsontakis’ individual, memorable melodic expressivity.