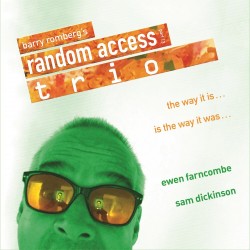 the way it is… is the way it was…
Barry Romberg’s Random Access Trio
Independent (barry-romberg.com)

In his brief and somewhat self-deprecating album notes Barry Romberg says he “lost (his) mojo for creative recording pursuits” – something that lasted nine long years. However, listening to the music of The way it is… Is the way it was by Barry Romberg’s Random Access Trio it is hard to think that anything was really lost. Romberg’s sense of propulsion and of time is – if anything – more effervescent and masterful than ever.

Using two harmonic instruments – the keyboard(s) played by Ewen Farncombe and guitar by Sam Dickinson – Romberg creates the effect of firing on multiple musical cylinders. Those cylinders do not necessarily equate to one-each for pianist and guitarist with the rest for Romberg. While it is true that it appears that the rolling thunder of the drums and the hiss and swish of Romberg’s cymbals make much of the delightful noise of the music. The young musicians bring a refreshing energy to songs such as Rocks on Rocks and the two-part suite We Want Miles (which also features old pal Kelly Jefferson on soprano and other saxophones).

To be correct, Dickinson also creates a myriad of electronic effects that add not just atmospherics, but also genuine harmonic riches to the music. Moreover, without much of a break in the proceedings from track to track, you feel a kind of wonderfully expansive and meaningful effect of music that is anything but randomly accessed. 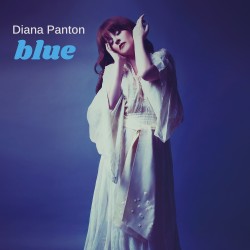 For jazz musicians, the “with strings” musical concept is often a bucket list goal. It is little wonder why. Not only have there been some incredibly satisfying recordings made with this instrumentation – Charlie Parker with Strings, Clifford Brown with Strings, Stan Getz’s Focus, to name but a few – but well-written string parts have an effervescent and lush quality capable of enlivening already swinging performances to new and exciting musical heights.

Such is the case here on Diana Panton’s Blue. Captured again in the familiar company of longtime musical compatriots Don Thompson and Reg Schwager (this, their tenth recorded collaboration), Blue brings the talented bassist Jim Vivian into the core trio, fleshed out here by saxophonist Phil Dwyer. Great casting!

Adding to the musical wonderment is the sweetening that Thompson’s beautiful arrangements for the great Penderecki String Quartet bring to the entire affair. How nice it is to hear this world-class chamber group, Wilfrid Laurier University’s Quartet-in-Residence, perform in such an intimate jazz setting. Speaking of setting, it would be difficult, perhaps, for any vocalist to come up short while fronting such a blue-chip ensemble. But such a risk was never a possibility with Panton, who once again leans into her strengths of crystalline phrasing and evocative lyrical nuance that she brings to a great set of music. It is a musical formula for success that has served her well on the previous nine releases, so why would this be any different.

The complimentary aspects of Blue contribute much to Panton’s already terrific discography, while the strings add just enough newness and musical freshness to uncork new possibilities for band and listener alike. Perhaps best of all, this new recording adds another important artifact into the canon of great Canadian jazz that documents the ongoing, and still developing, musical partnership of Panton and Thompson.

Listen to 'Blue' Now in the Listening Room 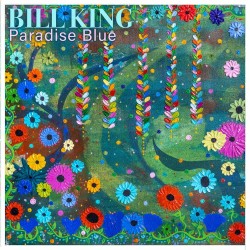 Solo piano music fills its absolute potential when the entire dynamic, melodic and expressive range of the instrument is utilized in an uninhibited fashion that allows for the player’s idiosyncrasies to shine through. Paradise Blue manages to distinguish itself in precisely this way. The standards are tackled in an engaging and subversive manner. Bill King’s playing humbles itself, staying indebted to the original melodies, while also challenging the listener to find the tune within the margins of the creative voicings and improvisational storytelling.

On It Could Happen to You, King weaves an intricate rhythmic tapestry, punctuating every run and turn of phrase with inspired left-hand comping. The runs themselves are dizzying, incredible spiral staircases, seeming to ascend and descend at the exact same rate. While soloing, it can be evident that King is keeping a given song’s written melody in mind for pretty much the entire piece, often cleverly burying offhand references to it in increasingly unthinkable corners. The amount of fun being had is infectious, with stretches of the album having the same sense of adventure as an Easter egg hunt.

These upbeat bits contrast perfectly with watershed moments like Redemption Song. In the intro, the way King unapologetically sustains each note gives the classic song an almost mournful quality, leaving us with no option but to meditate with them. The piano can be, above all else, an interpreter of expression and feeling. Exhibit A: Paradise Blue.

Listen to 'Paradise Blue' Now in the Listening Room 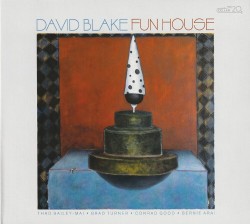 There is a unique vibe present in Canadian jazz music that sets it apart from the goings on south of the 49th parallel and in other continents. Guitar might be the most distinctive example of this sound, conjuring up names like Ed Bickert, Lenny Breau and Nelson Symonds. All were influenced by the American fathers of this music, but they managed to never sound starkly beholden to the tradition.

The aforementioned three guitarists spent most of their time in the eastern half of Canada, but Western Canada’s largest city currently boasts some outstanding players too. Enter David Blake. A Vancouver native currently living in New York City, Blake shows off his tasteful modern playing and composing on his latest release Fun House. It is well worth noting that this recording is tracked, mixed and mastered by another great Vancouver guitarist, David Sikula.

An enthralling artsy photo of Blake lies inside of Fun House’s digipak for anyone who’s purchased it in CD form, and to me it was almost a surprise to see the guitarist holding a traditional looking archtop jazz guitar. The tones heard on these nine tracks are quite modern, but blurred lines are a theme heard throughout. Jon, No Jon and Devil Stick are both rhythmically labyrinthine despite being grooving and fun, while the two tracks that follow could be described as ballad-like.

Blake treats Strayhorn’s classic The Single Petal of a Rose beautifully as an a cappella number, and after repeated listening this writer can’t quite tell what sort of ambient pedal effects are present.

“Fun indeed” was a note I took upon first hearing this recording, and that’s a perfect way to describe the multitude of dimensions Fun House provides its listeners. 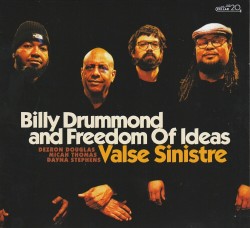 Elegant, dynamic and innovative jazz drummer Billy Drummond has just released a stunner of a recording that not only embraces his seminal influences, but illuminates his musical path moving ahead – replete with nods to iconic figures in Drummond’s musical journey, including the title track, composed by the luminous Carla Bley, with whom Drummond performed. Drummond’s accomplished Freedom of Ideas quartet includes Micah Thomas on piano, Dezron Douglas on bass and Dayna Stephens on saxophones.

The opening salvo is Little Melonae, where the incomparable Jackie McLean’s bop legacy is elegantly celebrated with a face-melting, rapid fire arrangement. Douglas’ commanding tenor solo is rife with pumpitude, and the relentless rhythmic force is propelled by Drummond, who phases us into a new dimension, creating an incendiary background for this incandescent celebration of a much missed grand master.

The title track is an intriguing contribution to the program. Drummond’s close musical relationship with Bley is apparent here, invoking images of an exotic Eastern European circus, with madness and excitement in equal portions. Also of note are Grachan Moncur’s Frankenstein – where Drummond explores musical cognitive dissonance, while Stephens’ rapier-like soprano breaks through all imagined boundaries – free and exuberant. Drummond’s compelling composition, Changes for Trane & Monk is an invigorating joy. Other stellar tracks include the diaphanous Clara’s Room written by the eminent saxophonist Frank Kimbrough. A true standout is Drummond’s arrangement of the Tony Williams classic Lawra, where, although he is clearly channelling Williams’ creative spirit, Drummond makes his own mark on an exquisite tune. 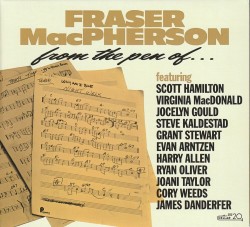 Toronto may have a reputation for being the Mecca of Canadian music, but there is ample evidence to suggest that Vancouver might actually have as much (if not more) to offer as hockey-crazy Toronto. You have only to recall the late but still ubiquitous musicians such as Hugh Fraser, Ross Taggart and Fraser MacPherson to remember that musical Vancouver was a musical city nonpareil.

Cory Weeds, the Cellar Music supremo is almost alone in gently reminding us that Macpherson is also deserving of a different kind of attention due to his prodigious compositions. From the pen of… Fraser MacPherson pays homage to that side of a musician we might recall as just a saxophonist. MacPherson was not really a prolific composer. Yet if the 11 compositions we have on this disc are any indication then clearly Macpherson is much more deserving as acomposer than is generally credited.

The eloquent bellow of Scott Hamilton’s tenor or the luscious glide of Harry Allen’s saxophone on Night Spot and Waltz for Willi respectively and Bernie Senensky, Neil Swainson and Terry Clarke playing on Our Blues clearly mark this as a masterful disc. It is also the liquid virtuosity of clarinettist Virginia MacDonald (Queen’s Pawn), the volcanic heat of Jocelyn Gould’s guitar and voice (It’s a Human Race), Joani Taylor’s questing vocals (For Your Love) and James Danderfer’s elegantly growling bass clarinet (Theme) that add to the enormous allure of this disc. 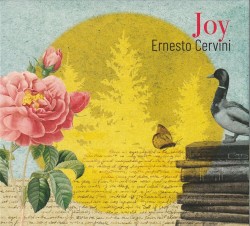 JUNO award winning multi-instrumentalist, composer and bandleader Ernesto Cervini has been at the forefront of Canada’s modern jazz scene, becoming a beloved and desired musician both locally and nationally over the years. It’s not very often when an in-demand performer has either the time or opportunity to be able to release an album that is entirely a personal project such as this release is, which makes it all the more special. It is clear that it has truly been an “absolute labour of love” as Cervini himself mentions, right down to the fact that the musicians in the backing band were hand picked by Cervini as he imagined them specifically playing the solos on the album. Featured are widely known talents such as Emily Claire-Barlow on vocals, Adrian Farrugia on piano and Dan Fortin on acoustic bass.

The record directly harkens back to a series of mystery novels by Louise Penny centring around Chief Inspector Armand Gamache and life in a Quebec village called Three Pines. Each piece is an incredible soundscape on its own, reflecting the personalities of specific characters throughout the books, calling forth images of beautiful landscapes and just generally giving a great overview of the world of Three Pines and village life through distinctive rhythms and melodies. Captivating and thoroughly engaging from beginning to end, this album is an enticing deep dive and journey, which the listener will want to continually explore further.

Listen to 'Joy' Now in the Listening Room