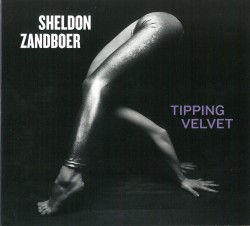 While many contemporary pianists seem to delve into the piano’s more percussive aspects today, Calgary’s Sheldon Zandboer is of the school of piano virtuosi who subscribes to the view that it pays to forget sometimes that the mechanics of the instrument involve hammers striking strings. His is a style of pianism that is given to the teasing caress of the keys. Not surprisingly this produces music – melodies and harmonies from right and left hands – that is exquisitely velvety in its tone and eloquently phrased. Throughout, Tipping Velvet displays inventive discourse progressing in nuanced measures.

Risks abound, but they are always in the service of the music’s spirit and they always pay off. Combining a darkness of theme with a wickedly humorous unveiling of the musicians, Snakes and Liars, for instance, ends up being one of the sunniest pieces on the recording. A similar conundrum exists at the beginning of Tear in a Smile; its illusory nature resolved once again, in the translucent longing-for-spring atmosphere of Zandboer’s delicate keyboard hands.

Zandboer’s musical gems are a must-listen not only for his exquisite pianism, but also for the majestic work of Bob Tildesley’s trumpet, especially when the mute is employed and notes are squeezed out of the bell of his horn. The performances of bassist George Koller and drummer Andy Ericson crackle with genius and I Will Wait soars heavenward, not least because of the blithe spirit of vocalist Johanna Sillanpaa.