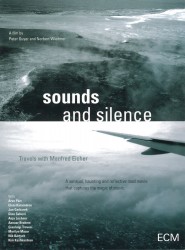 Since I first heard Keith Jarrett’s Köln Concert in the 70s, I have been listening to ECM records. My musical tastes have been influenced over the years by the artists the label represents. Although the recording artists’ names would always vary, the producer’s credit seemed to be a constant: Manfred Eicher.

This film offers an intimate view of the recording process both in studios, and in various reverberant spaces around the world. The filmmakers follow Eicher as he travels to produce his discriminately selected artists from Scandinavia to South America. He is shown in most recording sessions as a man deep in listening, rarely communicating verbally with the musicians. It’s as though his presence alone offers reassurance and companionship in the creative process.

Eicher imparts very few words throughout the film, which leaves the viewer feeling equally unfamiliar with him upon completion. Nonetheless, Sounds and Silence is quite beautiful to watch as we travel through the different coloured locales and listen to the respective musical sounds.

In his humble presence, it seems apparent that Eicher is very devoted to his craft. Composer Eleni Karaindrou says of Eicher, “Wherever Manfred works, he is 100 percent involved. That is the true nature of his passion. He devotes himself to the moment and is entirely committed to the artist he is recording.”