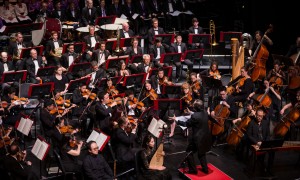 The Kindred Spirits Orchestra has been performing to great acclaim, sold-out audiences, and standing ovations at the Flato Markham Theatre and at the Richmond Hill Centre for the Performing Arts, as well as at the CBC Glenn Gould Studio in Toronto. Highlights of the 2020/21 concert season include Bruckner’s First, Shostakovich’s Fourteenth, Prokofiev’s Fifth and Scriabin’s Second symphonies, as well as Tchaikovsky’s Manfred Symphony and Wagner’s Symphony in C Major. We are thrilled to welcome back Michael Berkovsky in Prokofiev’s Piano Concerto No. 2, Andrew Ascenzo in Shostakovich’s Cello Concerto No. 1, and Christina Petrowska-Quilico in Tan Dun’s Piano Concerto “The Fire”. Ludmil Angelov will make his début with the KSO in Chopin’s Piano Concerto No. 1, and Gregory Vandikas in Scriabin’s Piano Concerto. In June 2021, the KSO and Markham Contemporary Music Festival will return to Cornell Recital Hall for a series of concerts presenting pieces by Pärt and Górecki as well as Symphony No. 14 by Shostakovich, featuring soprano Stephanie de Ciantis and bass-baritone John Holland. The concert season will conclude with a performance at the CBC Glenn Gould Theatre and a Canada Day celebration at Unionville Millennium Theatre.