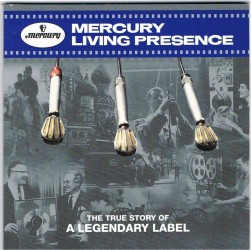 Mercury is the latest major record label to issue an omnibus collection of their recordings packed into the now familiar 5½ inch box format, in this case entitled Mercury Living Presence Collector’s Edition (4783566) (50 CDs, a 63-page booklet plus an interview CD with Wilma Cozart Fine, Mercury’s producer). Mercury was founded in 1945 in Chicago as a pop label, then jazz, and in 1951 Mercury emerged as a company of major classical interest with their ground-breaking Olympian Series with the Chicago Symphony under Raphael Kubelik. The era of high fidelity was about to emerge and their adopted logo, Living Presence, became a beacon familiar to record collectors and in particular the nascent, yet to be named, audiophiles. Music lovers around the world soon looked for new Mercury recordings from Chicago … or anywhere else. Mercury’s Olympian Series boasted “single microphone” recordings updated to three microphones with the advent of stereo in 1958. Their production of the 1812 Overture with Antal Dorati and the Minneapolis Symphony, with overdubbed cannons and bells, exploded onto the scene, racking up unheard of worldwide sales. To this day, it has never been out of print. Inevitably, Mercury’s engineers and their equipment went overseas to make recordings, including an historic trip to Russia in 1962 where they documented their “house pianist” American Byron Janis playing with Kiril Kondrashin and the Moscow Philharmonic. Mercury made the first complete Nutcracker with ballet conductor Dorati, a stalwart figure in their catalogue along with Paul Paray (Detroit), Howard Hanson (Eastman-Rochester), Frederick Fennell (Eastman Wind Ensemble) and Stanislaw Skrowaczewski (Minneapolis). Soloists, including Janos Starker, the Romeros, et al., along with the complete contents of this absurdly inexpensive collection, are detailed at www.deccaclassics.com. This is not intended to be a basic collection, but it is a well-chosen array of sparkling and rousing performances of alternate repertoire.

My introduction to Tchaikovsky’s Manfred Symphony was on an RCA Victor Long Playing Record (“LP” was the property of Columbia) recorded in 1949 by Toscanini and the NBC Symphony. It remains for me the performance against which all those that followed have been weighed. None has equaled the intensity of that 1949 performance, particularly, but not only because of, the ferocity of the closing pages of the first movement. Unequalled until now. 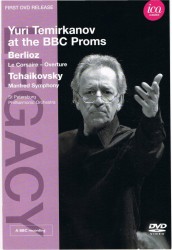 On the evening of 26 August, 1992 at the BBC Proms in the Royal Albert Hall, Yuri Temirkanov conducted the St. Petersburg Philharmonic in an extraordinary performance of Manfred, telecast by the BBC and now on a new DVD from ICI Classics (ICAD 5065). Temirkanov was Mravinsky’s assistant when the orchestra was known as the Leningrad Philharmonic and in 1988 he became their music director and chief conductor. Following the drama of the first movement, the two middle movements depicting romantic ideals and aspirations are played without bathos but with passion and often lace-like delicacy. What makes this performance unique is the re-introduction of the entire first movement coda to bring the work to an over-the-top conclusion reflecting absolute despair rather than Manfred’s redemption and consolation in Tchaikovsky’s original. The program includes Berlioz’ Corsair Overture and several, worth the price of admission, encores including a Mravinsky specialty, the pas de deux from the second act of The Nutcracker. Also an inspired “Nimrod” from Elgar’s Enigma Variations and finally the “Death of Tybalt” from Prokofiev’s Romeo and Juliet. Wide open sound and faultless video makes this stunning DVD a must-have. 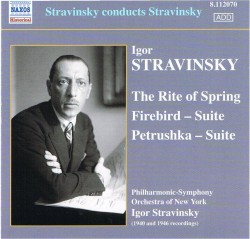 1940 saw the beginning of a six year association of the New York Philharmonic and Igor Stravinsky as conductor during which they recorded many of his popular ballets and shorter pieces. A new release from Naxos contains brilliant transfers of the three best known ballets, Firebird, Petrushka and Le Sacre du Printemps (8.112070). This may not have been particularly significant except for the fact that these are the most vital and close to artifact-free transfers of these historic performances to find their way to CD. Somewhat surprising are the perspectives, so clearly heard here. The orchestral playing is immaculate and the musicians are alert and enthusiastic. Stravinsky’s tempi and drive are compelling and a revelation, arguably definitive.

The Firebird is the 1945 suite (26 minutes), Petrushka is a suite of eight sections from the 1911 score (16 minutes) and Le Sacre is the complete 1913 original. Actually “original” is not exactly accurate. Some half dozen years after the premier Stravinsky was asked to correct the many copyist’s errors in the existing originals. As it happened, Stravinsky had some second thoughts and new ideas that he substituted for the original passages. In 1947 he would publish a new revision which would take it out of the Public Domain. In addition to achieving a miraculous recovery of the details within these old 78s, shaming the other re-issues over the years, an unsuspected mistake in the accepted recording date of Le Sacre has been corrected.

Being obsessive and believing that the recording date of Le Sacre was April 29, 1940, I questioned April 4th as shown on this CD. Naxos’s Director of Media Relations, Raymond Bisha forwarded Mark Obert-Thorn’s reply: “My date came from James H. North’s discography, The New York Philharmonic – The Authorized Recordings, 1917–2005 (The Scarecrow Press, 2006). Under the date of April 4th that he gives for this recording, he has a reference to the following note: “The misreading of a single Columbia fact sheet (now in Sony’s archives) led to the incorrect dating of all Philharmonic recordings in the spring of 1940 [ … ] Those erroneous dates have persisted over decades of record issues — including the Dutton and Andante CDs — and discographic listings. The dates on that sheet are for “re-recording,” a further step in the process [i.e., transferring from the 33 1/3 rpm lacquer masters to 78 rpm wax masters], not for orchestra recording sessions. The correct dates, taken from the orchestra personnel manager’s hand-written weekly reports, are listed here. So, the April 4th date for Stravinsky’s recording of Sacre is correct, and the date of April 29th refers to the re-recording process.” Sometimes you just have to ask!