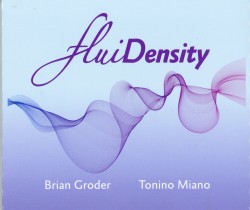 Here is a recording of free improvisation that channels the players’ multiple sources to combine American jazz and European art music. Related to the tradition of “free jazz” founded by Cecil Taylor at the end of the 1950s, this way of making music requires prodigious rhythmic assurance and close attention to moment-to-moment events. Recording it is the exacting art of the single take: no editing, no overdubs, nowhere to hide.

The players are engaged in a kind of collective creation that balances the strong individualism of each against the duo’s ability to meld their ideas. In this, Groder and Miano happily avoid standard improvisational techniques of simple imitation or “default” roles such as soloist and accompanist.

Miano’s virtuosity is all over the piano. He is most often the “dense” to Groder’s “fluid” in this equation. He never lacks for textural and gestural ideas that contribute a sense of designed space to the improvisations, his harmonies ranging from modal to atonal.

Groder’s sound is the more deeply “jazz,” especially in the way a jazz wind player accesses quasi-vocal lyricism. His phrasing, articulation, pitch modulations and Miles Davis-like staccato identify him as the American in this European-American pairing. The lonely, elegiac solo trumpet is an iconic 20th century American sound that here avoids cliché by virtue of its sincerity.