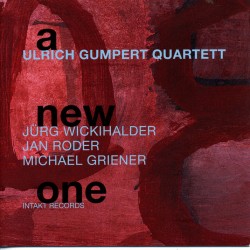 East Germany’s most prominent jazz composer/pianist, Ulrich Gumpert, 70, shows that he has lost none of his Teutonic-Thelonious acuity in the quarter century since the destruction of the Berlin Wall. With band members several years his junior, including Germans, bassist Jan Roder and drummer Michael Griener, plus Swiss saxophonist Jürg Wickihalder, the quartet moves through 11 mostly Gumpert-composed tunes that could equally impress in a West Berlin club with aficionados familiar with the sounds of Monk and bop, as well as an East Berlin theatre audience more attuned to Socialist Realist anthems and folkloric marches.

One instance of this is Iffie, initially a balladic theme the pianist developed years ago for a performance with a poet, resolved with a snorting Wickihalder solo into 100 percent contemporary jazz. Recitativo Secco, is a plaintive Germanic recitation for full band that too is transformed into a jokey promenade with cymbal sizzles and reed smears. There’s also the Griener-composed Süshotz, a simple rustic tune that balances Mozartian rococo with a charming alto saxophone lead. With Wickihalder playing tenor saxophone, Number Nine and the give-away titled The Bop & The Hard Be are more overtly Monkish, with the pianist replicating Monk’s hesitant yet spiky chording on the second, as Roder walks and the saxophonist channels Johnny Griffin’s bite and speed. Expanding and contracting time as it develops, Number Nine shuffles as much as it swings with Gumpert introducing ragtime and boogie-woogie motifs that lock in with Wickihalder reed outbursts that are as hard and thick as titanium.

Like a pseudo-military march the penultimate Scrollin’ is driven by a tough drum solo, moderated by elegant string reverberations from Roder, ending in a formation that finds each musician hopscotching and circling around the others as he solos. Confirming that sardonic humour wasn’t stifled in the German Democratic Republic (GDR), the CD ends with a 55-second reprise of Iffie called Iffie’s Saloon, with appropriate barroom-like plinking from Gumpert and nasal soprano saxophone passages from Wickihalder. In spite of its misdeeds, the GDR allowed talents like Gumpert to flourish; luckily A New One gives us in the West a new way to experience it.