Alex Winter’s new documentary – ZAPPA – about the iconoclastic musician and biting social satirist, Frank Zappa, has much in common with Thorsten Schütte’s absorbing, revelatory 2016 documentary, Eat That Question: Frank Zappa in His Own Words. Zappa’s widow Gail (d. 2015) and son Ahmet (who runs the extensive Frank Zappa estate through the Zappa Trust as co-Trustee) were executive producers of the 2016 film. Ahmet Zappa is also a producer of the new film, which is more about the man than the previous more music-oriented doc. A conservative libertarian who had no use for drugs, Zappa was not how he appeared to be. Nonetheless, given the extent of the Zappa archives, there is much treasure to be found here. Early in the film the man himself takes us on an archival tour – a labyrinth of floor-to-ceiling 8mm movies, audio and videotape of recording sessions, even jam sessions by the likes of Don Van Vliet (Captain Beefheart) and Eric Clapton (neither of which we hear – perhaps they’re being saved for future release).

Zappa’s early home life was completely without music. His father worked at a gas chemical factory, so his toys were gas masks and his interests concentrated on chemistry – he made gunpowder at the age of six. As a young teenager he read a magazine story about how Sam Goody’s (a major record seller in the 1950s) was able to sell records by Edgard Varèse that were considered too strange for most people to buy. Zappa bought The Complete Works of Edgard Varèse and it changed his life. “I just liked it [the way percussion was playing an integrated melodic part] and couldn’t understand why other people just didn't like it,” he said. There’s an 8mm snippet of him playing Varèse on the harmonica. He had no interest in Mozart or Beethoven, “only in the man who could make music which was that strange.” Hearing Ionisation led Zappa to write orchestral music. Much later, he took to playing Varèse’s Octandre as an encore “because after hearing it, the audience wouldn’t possibly hear another number.”

He taught himself to play blues guitar in high school by listening – sometimes staying up until 3am – to the music of Clarence “Gatemouth” Brown, Guitar Slim, Elmore James, Lowell Fulson and Johnny “Guitar” Watson (with whom he later played). In his mid-teens he was a member of a racially mixed band, The Blackouts, which at the time was considered too radical for the small California town where he lived.

In the opening credits of The Cuban – a new film released in Canada in July, written by Alessandra Piccione and directed by Sergio Navarretta – the viewer is treated to a watercolour montage of Cuban imagery, accompanied by evocative, minor-key music played by a small ensemble. As the credits end and the visuals shift from vibrant animated colour to the live action of a Canadian assisted-living facility, the band drops away. Alone amidst the beige-grey gloom, the piano pensively underscores the scene: paperwork is frowningly passed back and forth; a young boy, bored with his visit, works on a jigsaw puzzle; a full bedpan, making a trip down a dimly-lit hallway, is spilled onto the hardwood. It speaks to the mood-setting power of the score that the moment doesn’t come off as a joke, nor a tragedy, but rather as a small, frustrating but typical event in a day spent caring for the elderly.

The bedpan-spiller is Mina (Ana Golja), a young university student who works at the assisted-living facility, and The Cuban examines the relationship that she develops with Luis (Louis Gossett Jr.), an elderly Cuban musician who lives at the facility and who suffers from dementia. The pianist is Hilario Durán – JUNO-award-winning, Grammy-nominated – who, in addition to performing on the soundtrack, was the film’s score composer. In light of the film’s recent release, I had the opportunity to interview Durán via email about the project’s roots, his connection to the film’s characters, and the Toronto musicians who helped him bring his musical vision for the film to life.

Read more: Music and the Movies: Q&A with The Cuban’s Hilario Durán

In this year like no other, the Toronto International Film Festival (TIFF) has adapted to the pandemic’s parameters by making most red carpet events virtual and scaling back on how films will be presented.

TIFF’s 45th edition – running from September 10 to 20 – offers both digital and in-person screenings, using TIFF Bell Lightbox and the Isabel Bader Theatre at reduced capacity to conform to measures provided by the City of Toronto and Public Health Ontario, ensuring that there will be a modicum of lineups. As well as drive-ins at CityView and Ontario Place, there will be an open air cinema at Ontario Place. A sophisticated, secure digital platform, called Bell Digital Cinema, will house most of the 50-plus films selected for TIFF 2020 enabling Festival-goers to watch Festival films at home on their television screens.

Given The WholeNote’s early deadline, TIFF’s schedule and program notes were unavailable, so the current guide is based on a film’s subject matter, a filmmaker’s track record and gleanings from across the Internet.

In this year like no other, the Toronto International Film Festival (TIFF) has adapted to the pandemic’s parameters by making most red carpet events virtual and scaling back on how they will be presenting films. TIFF’s 45th edition – running from September 10 to 20, 2020 – will offer both digital and in-person screenings, using TIFF Bell Lightbox and the Isabel Bader Theatre at reduced capacity to conform to measures provided by the City of Toronto and Public Health Ontario, ensuring that there will be a modicum of lineups. As well as drive-ins at CityView and Ontario Place, there will be an open air cinema at Ontario Place. A sophisticated, secure digital platform, called Bell Digital Cinema, will house most of the 50-plus films selected for TIFF 2020, enabling Festival-goers to watch Festival films at home on their television and computer screens.

Given The WholeNote’s early deadline, and with TIFF’s schedule and program notes still a work-in-progress, our annual guide is based on a film’s subject matter, a filmmaker’s track record and gleanings from across the Internet. What follows is a small taste for HalfTones readers of our ninth annual TIFF Tips. Be sure to check out the full story in the September edition of the magazine.

Read more: PREVIEW: 9th Annual TIFF TIPS – for a TIFF like no other

The Whistlers, the new film by Romanian director Corneliu Porumboiu (12:08 East of Bucharest; Police, Adjective), is a lighter-than-air pastiche, a diversion filled with film noir tropes and other cinematic homages, all buoyed by a soundtrack that ranges from Iggy Pop, Ute Lemper and Anna Netrebko to Johann Strauss father and son, punctuated by the likes of Diomedes Diaz & Nafer Duran, Lola Beltrán and Jeanne Balibar.

The well-chosen music begins with Iggy Pop’s jaunty tune, The Passenger, as soon as police detective Cristi (subtly played by Porumboiu regular Vlad Ivanov) arrives at La Gomera in the Canary Islands for a ride inland. He’s there to learn the whistling language, a coded method of communication native to the island of La Gomera that sounds like birds singing, which will enable Cristi to work around any surveillance in the layered, opaque goings on to come. He’s also re-introduced to Gilda (Catrinel Marlon), a bona fide “femme fatale” (a shout-out to Rita Hayworth’s iconic character in Gilda).

As Porumboiu said in an interview with Marcus Rothe: “She’s the archetype of a woman who plays the femme fatale: she betrays the men, turning against them. Catrinel Marlon plays this lure very well, as an ambiguous and unsettling character who manages to manipulate others without them realizing it.”

Cristi is a compromised cop in the pocket of gangsters and known to his fellow detectives who follow his every move in what sometimes resembles an intricately plotted police procedural. He checks into the Opera Motel, its lobby permeated with the sound of an LP of Anna Netrebko singing Casta Diva from Bellini’s Norma. (The hotel clerk tells him that “we are trying to educate” the clientele.) The operatic spirit continues with Netrebko and Elīna Garanča filling the soundtrack with the Barcarolle and its “nuit d’amour” from Offenbach’s Tales of Hoffmann as Cristi drives to a small house where he leaves a package. Later the hotel clerk sings along with it before slitting the throat of a policeman who had asked him to turn off the music. The lovely foreboding and air of mystery of Mozart’s cavatina, L’ho perduta me meschina, from The Marriage of Figaro (sung by Patricia Petibon) accompanies more Cristi subterfuge while later, Ute Lemper’s sublime rendition of Kurt Weill’s Moritat der Mackie Messer (Mack the Knife) is cleverly introduced by its familiar tune being whistled.

As Porumboiu put it: “Music has a strong and important presence in this film with rapid shot or scene changes, since it permeates short scenes and quickly denotes a character’s world. I also like to create interesting shifts using unexpected musical tracks. For instance, by playing classical music in violent scenes or action sequences. This is another way I play with the conventions of the genre film while subverting them.”

The action, which cuts between the rainy gloom of Bucharest and the streams of sunlight beneath the clouds of La Gomera, ends in the neon explosion of Singapore’s Gardens by the Bay, with a greatest-hits medley of waltzes by the Strausses (On the Beautiful Blue Danube, Du und Du and Radetsky) and Tchaikovsky (Waltz of the Flowers from The Nutcracker) climaxing in the “Galop infernal” (better known as the French can-can) from Offenbach’s Overture to Orpheus in the Underworld. All of which is introduced by a portion of Orff’s Carmina Burana.

The Whistlers is currently playing at TIFF Bell Lightbox. 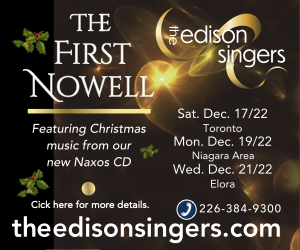