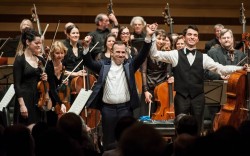 A highly charged, fully packed Koerner Hall audience greeted the appearance of Yannick Nézet-Séguin and his Montreal-based Orchestre Métropolitain for their Toronto debut April 24. In a brief introduction to the concert's first half, Nézet-Séguin spoke of his 15-year relationship with the orchestra and the “French colour” they would bring to the evening of English music he had programmed.

Elgar's Enigma Variations had an intensity that revealed the architectural solidity of the piece. Wonderfully balanced full chords proceeded via a series of crescendos. There was sentiment without sentimentality (swells were swell) and a jocularity that foreshadowed the Edwardian Age about to dawn. (The work was composed just at the end of the 19th century.) With each variation dedicated to a friend or loved one (the first lovingly portrays the composer's wife), Elgar's creation is filled with tenderness and nostalgia. Its pastoral qualities (for King and Countryside you might say) were epitomized by a wind choir supported by strings. The famous Variation IX, “Nimrod” was dedicated to the memory of Paul Desmarais, a great supporter of the orchestra. The slow build begun by the flute and oboe duet buttressed by low strings reached great and stately heights before suddenly disappearing into the air, like fluttering insects in the wind. 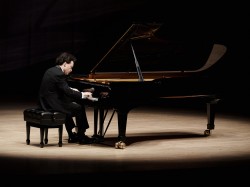 Evgeny Kissin held an appreciative audience in his thrall May 1.  Roy Thomson Hall was filled from top to bottom including the choir loft and dozens of stage seats for the Russian-born pianist's first solo recital in Toronto in 15 years. Three rows of seats on either side of the stage marked the outer edge of an  umbrella of light that illuminated Kissin as he put his inimitable stamp on Beethoven's “Waldstein” Sonata, Prokofiev's Sonata No.4, three nocturnes and six mazurkas of Chopin as well as Liszt's Hungarian Rhapsody No.15 “Rákóczi March.” The Prokofiev, which ended the concert's first half, elicited a spontaneous standing ovation. The final notes of the Liszt at program's conclusion generated even more response, four standing ovations, three of which resulted in encores, culminating in Prokofiev's March from the Love for Three Oranges. It was an adoration complete with whoops, cheers and even a spate of unified rhythmic clapping.

April 14, 2015 was a special day for me. I got to hear two of my greatest personal heroes together on the same stage doing what they do best: creating music.

In 1978 Herbie Hancock and Chick Corea embarked on a tour which culminated in a recording of live piano duo performances that has become a classic, perhaps even a touchstone, to which all jazz piano duos are compared. Nearly 40 years later they’ve reunited.

Luckily I had the opportunity to witness them live at a sold-out show in Massey Hall.

The Toronto Symphony’s New Creations Festival is turning out to be a remarkable blend between premieres of works not heard in Canada before, including two newly commissioned pieces and an experience of breaktaking performances by Canadian soprano Barbara Hannigan who was featured in the February issue of The WholeNote. With one show of the festival remaining on Saturday March 7 and the entire night devoted to a concert version of guest composer George Benjamin’s opera Written on Skin, all I can say is if you’re reading this before Saturday, you need not even think twice. It’s going to be spellbinding.

But before jumping ahead into the future, a look back at what has already transpired is in order. The two works that stood out for me at the February 28 concert were both devoted to studies of “a mind of winter,” which just happens to be the title of the work composed by Benjamin and performed by Hannigan that evening. As soon as the conductor’s baton was raised, from my close vantage point I could see Hannigan immediately begin to breathe into and with the sounds coming from the orchestra. I remembered what she had said in the interview we had for the February cover story – that when she sings she becomes fully a part of a large body making sound and breathing. She went on to say “that’s what makes singers so unique – because the voice is the most vulnerable of instruments, when you are connected with your whole body, your whole being is on display.” She so fully took the audience into this mind of winter state, that listening to the music lifted the listener far beyond the drudgery of winter into a place of stillness and exquisite beauty.