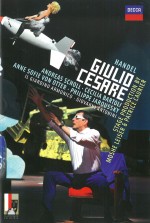 Until the 1960s the operas of Handel and his contemporaries, including Giulio Cesare, were generally viewed as unstageable. There was, however, a remarkable breakthrough with the production by the New York City Opera in 1966. It was a production that would not pass today’s standards of authenticity. Most seriously, the part of Caesar was transposed an octave down and given to a baritone. But the production, which I saw and remember well, certainly put the opera on the map. Other productions followed as did recordings. I, myself, am very fond of the recording conducted by René Jacobs with Jennifer Larmore and Barbara Schlick.

Operagoers of a certain age will remember the time when the main function of a director seems to have been to make sure that the members of the chorus did not get in the way of the soloists. The role of the director is now taken more seriously. In many ways that is a good thing as it has led to thoughtfully conceived work (I am thinking of the COC’s recent La Traviata and of Joel Ivany’s revised Carmen). On the other hand, the now important role of the director may lead to productions which are self-indulgent and self-promoting. I fear that has been the case with the Giulio Cesare under review. It was first staged at the Salzburg Whitsun Festival in 2012. It accents heavily the contemporary relevance: when the overture is played, there is a battle taking place on the stage (the booklet that comes with the DVD makes clear that this is meant to evoke the American invasion of Iraq). The treacherous Ptolemy, Cleopatra’s brother and consort, is likened to the late Colonel Gaddafi. On the other hand, there is also a contemporary reference of a very different kind: Cleopatra’s wig, when she visits Caesar in his camp, is clearly meant to invoke Elizabeth Taylor when she played the role. Elsewhere Cleopatra enters in combat uniform with a Tina Turner wig. Much of the singing is excellent. I particularly liked Anne Sofie von Otter as Pompey’s widow Cornelia and Philippe Jaroussky as his son Sesto. It is too bad that the directorial quirks overshadow the musical qualities of the performance. 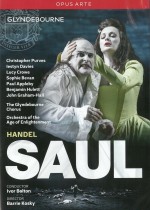 Both Saul and Hercules are oratorios and were not meant to be staged. But the reasons for that are largely historical and, in the case of sacred subjects, ideological. Many of them are suitable for theatrical realization as a number of recent productions have shown. This Saul, which has the superb Orchestra of the Age of Enlightenment, concentrates on madness. It was first performed at Glyndebourne in 2015. The production shows how madness is a destructive force, towards others but also towards the self. In the second part Saul goes to consult the Witch of Endor and asks her to conjure up the ghost of Samuel. Samuel is sung by Saul himself: this convincingly suggests that we are dealing here with an inner debate. Of the singers, I was especially impressed by the countertenor Iestyn Davies, who sings David. Christopher Purves (Saul and Samuel), Lucy Crowe (Merab), Sophie Bevan (Michal) and Paul Appleby (Jonathan) are also very good. 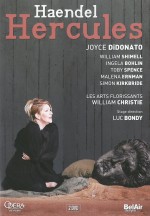 Hercules is a triumph, both because of the subtle conducting by William Christie and because of the imaginative staging by the late Luc Bondy. It is based on a staging at the Aix-en-Provence Festival and the Opéra National de Paris shortly afterwards. Les Arts Florissants is the excellent orchestra. A distinguishing aspect of the staging is the way Bondy presents the members of the chorus fully involved in the human drama. That drama centres on jealousy: Hercules returns from the sack of Oechalia with Iole, the beautiful princess of that land, as his captive. Iole is hostile to Hercules because he destroyed her city and killed her father. At the beginning of the oratorio she sings an aria in which she expresses the wish that she was a simple village girl. But there is an ambivalence here which the production neatly captures: a ring and a necklace appear. These are clearly gifts from Hercules. Iole accepts them and wears the ring for the rest of the duration of the oratorio. Joyce DiDonato is brilliant as Dejanira, Hercules’ threatened wife, and her singing is complemented by the lyrical voice of Ingela Bohlin as Iole and the dark mezzo of Malena Ernman as the counsellor Lichas.