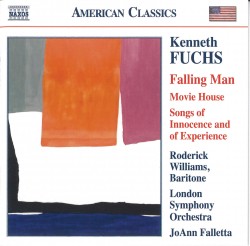 It was through an accident of timing, rather than by design, that I got to hear the haunting composition Falling Man, by Kenneth Fuchs, on September 11, 2014. Based on the 9/11 novel by Don DeLillo, the music immediately evokes comparisons with John Adams’ On the Transmigration of Souls, the brilliant tribute to the victims of the World Trade Centre terrorist attack. Where Adams wrote music that is elegiac and impossibly transcendent, Fuchs offers a much more personal reflection, tender and almost dazed in the aftermath of disaster. Though structurally dodecaphonic, the music does not strictly adhere to any blueprint, delivering lyrical and nearly romantic themes of a personal heartbreak in the face of a very public tragedy.

A champion of Fuchs’ music, JoAnn Falletta conducts the LSO brilliantly; but the real star of this recording is Roderick Williams, whose soft, velvety baritone belies the harsh descriptions of falling ash and human artifacts raining down on Wall Street that horrible morning. The companion pieces on the album, based on poems by John Updike and William Blake, including the incomparable Tyger, do not reveal such immediate connection with our recent past and deserve to be listened to on their own, within a different context.