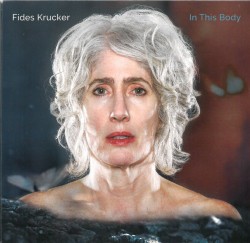 Anyone who knows the multi-dimensional and multi-disciplinary work of Fides Krucker is naturally going to wonder how much of the dance and – more importantly – the theatre that defines Krucker’s art this CD is going to capture. It is, after all merely audio. Fortunately, however, Krucker is a highly evocative vocalist and she spares nothing to imbue her music with atmosphere and even the nuanced auras of her often spiritual and always colourful work.

Even with the suggested stasis of the title, In This Body, one cannot help but imagine the body in motion. This is a work by Krucker, remember? True to form she creates a kind of series of one-woman operatic arias. Each is expressed in an inimitable manner which can only be associated by someone like Krucker. Her version of Leonard Cohen’s iconic piece Suzanne is turned from something almost impressionistic-Cohenesque into a work of extraordinary sensuality in an almost Nabokov-like (Lolita) manner. Another wildly sensual track – Striptease – follows this one.

But Krucker also rings in the changes of mood and emotion, structure and tempo with Mary Margaret O’Hara’s Body’s In Trouble, Leslie Feist’s Let It Die, k.d. lang’s Hain’t It Funny and, of course, the forlorn and classic song Helpless by Neil Young. Along the way, Krucker is magnificently aided by bassist Rob Clutton, pianist Tania Gill and percussionist Germaine Liu. Together the musicians propel Krucker into a rarefied artistic realm where she and her music truly belong. 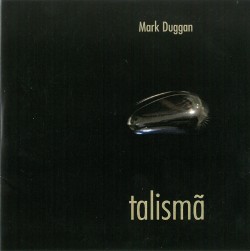 Percussionist Mark Duggan demonstrates his wide-ranging abundant musical talent in this project rooted in the Brazilian styles of samba, bossa nova and choro. Be it as a composer of four tracks, arranger of six Brazilian classics, and lead and chamber performer throughout, with outstanding musicians Louis Simão, contrabass and accordion, and Marco Tulio, violão (Portuguese guitar), Duggan’s understanding of vibraphone intricacies, compositional form/style and listening skills create music for everyone to enjoy, regardless of one’s stylistic preferences.

The trio plays the covers with respect and intelligence. Astor Silva’s Chorinho no Gafieira opens the recording with an upbeat happy start, thought-out vibraphone lines, good instrumental balances, and a simple yet colourful middle section. Antonio Carlos Jobim’s Triste has slight dynamic modulations and clear phrasing with the violão chords and contrabass keeping the faster vibes part grounded to the final Jobim chord. Duggan’s compositions are great. In his Above the Rain, the hypnotic two-note accordion start, with up-and-down melodic lines, is followed by vibraphone runs, which at times double and contrast the accordion chordal swells and staccato notes. Irresoluto is slightly more atonal yet rooted in rhythmic/melodic tradition, while Shifting Sands features a relaxing more traditional vibes melody with background bass groove, and instrumental dialogue throughout. Duggan’s firm grasp of the samba form in Samba des Nues is heard in its contrabass/violão rhythmic opening, florid lines and slower ending.

Listen to 'Talismã' Now in the Listening Room 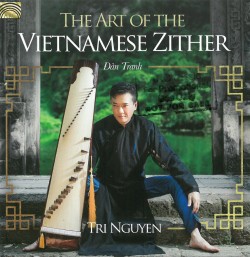 This album features the subtly expressive Vietnamese plucked zither đàn tranh, which belongs to the widely distributed family of Asian long zithers. Its cousins are the Chinese zheng and qin, Japanese koto, Korean kayageum, as well as the çatkhan of the Khakass of southern Russian Siberia and the kacapi of the Sundanese of West Java, Indonesia.

Born into a family of literati in South Vietnam, Trí Nguyen began his music studies at an early age on the piano with French-trained teachers, eventually continuing them in Paris. His family however was strongly attached to its ancestral Vietnamese culture and also arranged đàn tranh lessons for Nguyen with the noted master Hai Bieu. Nguyen’s bi-cultural training positions him well to pursue his goal of taking traditional Vietnamese music to international audiences, combining Vietnamese musics with global genres and instruments. His approach has already garnered success: his 2015 debut album Consonnances won the Global Music Award Gold Medal for world music.

In The Art of Vietnamese Zither, Nguyen draws on this bi-musicality, presenting the đàn tranh in a transcultural context. The closing tracks are up-tempo nods to a world-music style aimed at broad audience appeal in which he adds other Vietnamese instruments, the oud and darabuka (goblet drum).

The most impressive aspect of the album however is the suite presented in the first nine tracks. Effectively arranged for his đàn tranh and Western string quartet, they feature melodies borrowed and adapted from the six schools of traditional Vietnamese music he inherited from his master Bieu. 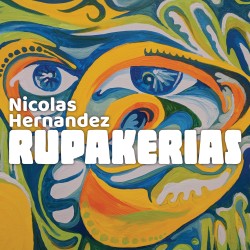 Nick Hernandez is a beautiful guitarist who generally keeps a low profile. The Toronto-based musician is an accompanist to flamenco dancers and singers, as musical director of Esmeralda Enrique’s Spanish Dance Company, and for the last dozen or so years, his main gig has been accompanying another fine guitarist, Jesse Cook. Now he’s stepping into the spotlight somewhat with his second album in 13 years (time flies!), Rupakarias.

Filled with original compositions in traditional flamenco song styles like guajiras and tarantas, the album also has some non-traditional elements such as South Asian drums, courtesy of Toronto tabla master Ravi Naimpally.

The title of the album is a portmanteau of two song styles – flamenco bulerias and the Indian classical tala, rupak. The song Rupakerias is an artful mashup of the two styles with tabla blending beautifully with the guitar and vice versa. The jaleos (calls) and palmas (hand claps) at the end give the song a traditional touch.

The gorgeous Mociones y Emociones is one of the more accessible songs on the album. Its Gipsy Kings-esque sound – a rumba style, which I think of as the pop music of the flamenco world due to the group bringing the style to prominence and global airplay back in the 80s – gives it a ring of familiarity.

The fiery bulerias Recordando a Cesar, will get your heart started with percussionist Rosendo Chendy León Arocha’s cajón playing and palmas driving the tempo. Dos Mundos is a bit of a departure with its searing electric guitar work, courtesy of Kevin Laliberté. Re Mi Sol is a sunny and evocative closer to this fine album. 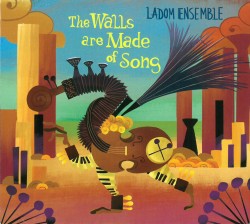 The Walls are Made of Song
Ladom Ensemble
Independent (ladomensemble.com)

The four classical arrangements for Ladom show respect for the original work while exploring new sounds in the transcriptions. Of note is the entertaining Brahms’ Hungarian Dance No.5 in G Minor featuring rapid accordion melody lines with tremolo bellowing, and contrasting dramatic fast and slow sections. The first movement of Bach’s Keyboard Concerto No.7 in G Minor is an interesting approach with contrapuntal lines against more modern, almost party-like rhythms. The stylistically accurate East Coast Medley featuring the “fiddle” parts on cello, a straightforward rendition of Piazzolla’s Libertango, and an orchestral flavoured cover of Radiohead’s Weird Fishes/Arpeggi bring welcome sonic contrasts. Vocalist Brenna MacCrimmon sings on two tracks. Her clear, beautiful vocals on the traditional Azeri Lullaby are supported by held notes to the final “falling asleep” cello pluck. Three original works are performed. Hamidi’s The Walls are Made of Song is a slower tonal soundscape with dramatic build and dynamic contrasts while his Gift is more a reflective almost mournful piece. Maziar Heidari’s Summer in Tehran features well placed short ideas.

Ladom Ensemble is an exciting, evolving group with musicality, technical acumen and an overwhelming sense of joy in playing. 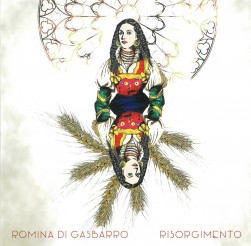 Multitalented Canadian vocalist/composer/instrumentalist Romina Di Gasbarro stretches her musicianship to the limits in her third CD release. She weaves together ancient and modern music such as folk, jazz, opera, art song and pop, in both Italian and English, to tell old-to-current cultural and political stories. Other than a few text and musical references throughout, such as from Verdi’s Rigoletto in 1000 (Viva V.E.R.D.I.), all music and lyrics are written by her with a self-described recurring theme of freedom and control.

Di Gasbarro sings with a clearly articulated rich quality in her native English and Italian languages. The recording features acclaimed Canadian instrumentalists too numerous to mention here whose performances add to the detailed artistic musical merits of Risorgimento.