I almost fell off my chair when I began to listen to the opening track from this new release. Astor Piazzolla's Libertango is a familiar work – I've heard the late great bandoneonist/composer perform it, I own his recording of it, I've played it and a number of my students play it – but I have never heard it like this! Harpsichordist Catherine Perrin plays the familiar melody with such aplomb that my interest is tweaked though I'm a little confused about the instrumentation. Gradually the other two instrumentalists, bandoneonist Denis Plant, and bassoonist/early music specialist Mathieu Lussier join in, and the stage is set for some fascinating albeit at times totally odd tracks of Latin flavoured originals and covers.

The experimentation with instrumentation is the key here. Both Plante and Lussier are composers too. Their contribution of pieces here are the most successful tracks. Lussier's Fantaisie is a strong, wistful work that walks the thin line of popular and classical music in its contrapuntal writing. Tango a los Nisenson from Plante's “Le tombeau d'Astor” is a comically tongue in cheek take on tangos. Both composers act as arrangers too, with their takes on Piazzolla, Villa-Lobos, Ayala and Falu respectable though not as intriguing as their own works.

Even though the performances and production qualities are superb, the instrumental grouping results in an odd timbre, and the occasional thin sound. This aside, “Bataclan!” is worth a listen to hear smart musicians experiment intelligently.

WORLDS OF MUSIC IN TORONTO

Click the above covers to jump to the reviews below. 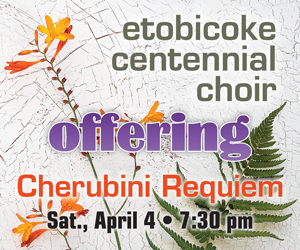