Stefan Wolpe (1902-1972) is still one of the underappreciated great composers of the twentieth century. It has been said by someone that Wolpe has all the complexity of Carter or Boulez, but with the added bonus that Wolpe can swing.

Pianist David Holzman is a persuasive advocate of Wolpe, having known and studied with him. This is his second disc for the Bridge label’s ongoing Wolpe series, his first from 2002 garnering a Grammy nomination. The works span 1926-1959 and range from epigrammatic to large-scale forms. The breadth of Wolpe’s character is in evidence here. An impassioned dramatic sense, rigorous intellect, lightness and wit all have a place.

Four Studies on Basic Rows (1936) is a work for only the most intrepid pianists, exploring particular intervallic relations while making extraordinary pianistic demands. The fourth of these, Passacaglia is a masterly construction of tempestuous drama and brooding introspection. Mr. Holzman’s ability to bring clarity to the dense counterpoint and thick textures is remarkable. An entirely different interpretation from Peter Serkin’s excellent 1986 recording on the New World label, Holzman brings an earthiness to this important work. The Toccata in Three Parts (1941) is a similarly challenging work, its double-fugue finale again presenting Mr. Holzman’s virtuosity.

The disc also features many aphoristic miniatures. Pastorale, a gem from 1941 will surprise those familiar with Wolpe with its gentleness and lyricism. Wolpe’s interest in Jewish folk music is represented by the dance-like Palestinian Notebook (1939), written after his sojourn in Jerusalem (1934-38).

One very enjoyable feature of both of Mr. Holzman’s Wolpe discs are his own liner notes, with a personable and sometimes amusing quality.

Astounding complexity and unabashed simplicity co-exist in Wolpe’s musical world. The concluding miniature Lively. Why not? will put a smile on anyone’s face.

Denis Gougeon’s poetic Le Chant de Pauline is a highlight. From the opening solo clarinet section onward the composer displays an assured voice, maintaining an active line that carries through the breaks and fissures of trills, bend tones, and flutter-tonguing. Clarinettist Farrugia, the work’s dedicatee, handles everything confidently and with feeling, as do de Médicis playing oboe d’amore in the ensuing duet, and Bettez completing the trio on bassoon. Ensemble and intonation are impeccable and all obviously believe in this work ― perhaps as a life journey?

Sudbury-based Robert Lemay’s atonal Fragments also impresses. Each of the nine miniatures has a distinct profile, with such arresting effects as microtonal pitch variations and pulsating dynamics. I like the mysterious static passages in Alain Perron’s Land of Living Skies II, and the use of chant and chorale in Marc O’Reilly’s Le poisson rouge. Stewart Grant contributes his neoclassical Serenata Estria to the reed trio’s repertoire, his mastery of free counterpoint being a clear inspiration to all.

The Hollywood Flute of Louise DiTullio

Louise DiTullio, the flutist of choice of many Hollywood film composers, including John Williams, over the course of a fifty year career, has played over 1,200 film scores. On this CD you can hear why she was in such demand: her sound, enlivened by a very organic vibrato, is pure and full and at the same time simple and unaffected. She plays the haunting themes from John Barry’s Dances with Wolves with enormous dignity, avoiding the temptation to slip into sentimentality. She is also capable of stunning virtuosity, as in The Lost Boys Chase, from John Williams’ score for Hook.

The CD was recorded two years ago with orchestra – Sinfonia Toronto augmented by woodwind and brass players from the TSO – conducted by Toronto conductor and composer, Ron Royer. Royer did all but one of the arrangements and also contributed a four-movement composition, Short Stories, one each for piccolo, concert, alto and bass flutes. In these the orchestration is masterful and the writing for all four solo instruments is fluent and idiomatic.

There is one other piece on the CD that was not composed for film, Laurence Rosenthal’s The Piper at the Gates of Dawn, for unaccompanied flute. Rosenthal, who is a film composer, gave a copy to Ms. DiTullio after a recording session. She has since performed it many times. This piece definitely deserves to become part of the standard repertoire for solo flute. 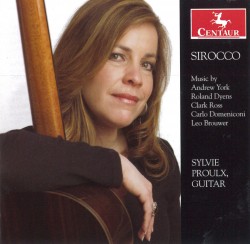 Here is a delightful solo recording by Canadian guitarist Sylvie Proulx featuring accessible yet virtuosic contemporary music for everyone, even those one or two of you who don’t like new music.

Proulx is a technical and stylistic wizard on the guitar. She tackles the non-stop perpetual rapid momentum of the fourth movement Presto in Carlo Domeniconi’s Koyunbaba with breathless ease. Her take on the Spanish musical influences of Andrew York's Sirocco are personal yet bang-on accurate. The more Baroque-like qualities of Leo Brouwer’s An Idea showcase her solid foundation in a more classical rooted work, and her ability to conjure a more subtle and soothing atmosphere from her instrument. Soothing elements resurface in the first movement of Roland Dyens’ Triaela while she gets to interpret more jazz and groove based lines in its other two movements.

The Theme and 10 Variations of Clark Ross’ Variations on McGillicuddy’s Rant are as wide ranging in style as Proulx’s talent. From folk dance to jig to chorale to bluegrass, it was written over a 20 year period yet is so cohesive in spirit and ideas that it sounds like it was composed after an afternoon at the pub.

It is really, really difficult to maintain a listener’s interest in a solo recording (or recital for that matter). Proulx’s guitar finesse with her excellent choice of repertoire makes “Sirocco” a recording that will keep one’s interest for a long time to come.

The Continuum ensemble, comprised of Toronto’s top contemporary musicians, adds a third CD to its discography. Here effectively conducted by Gregory Oh, the entire album is dedicated to the music of multi award winning Toronto composer James Rolfe (b. 1961).

raW (2003) is a delightful musical romp. Based on Bach's Second Brandenburg Concerto, Rolfe notes that the musical elements of raW are filtered through several reggae songs and the John Philip Sousa march Stars and Stripes Forever. The work starts smartly with a series of recognisable motoric sixteenths from the Bach treated to syncopation and silencing. This stream is then subjected to a complex multi-layered compositional process exposing evanescent and barely recognizable echoes of reggae and march. The effectiveness of raW is heightened by its masterful scoring. The first series of chords sound as if a much larger ensemble than Continuum’s six musicians produced it. Graced with deftly constructed light-hearted moments, it’s no wonder this effective work was awarded the 2006 Jules Léger Prize for Chamber Music.

The composer’s brand of cheeky humour re-appears in Devilled Swan (1995). Here the composer takes apart the late 18th-century hymn tune China by Timothy Swan, the American hymnodist. Like James Rolfe’s composition teacher John Beckwith has often done in his own works, Devilled Swan takes an established hymn and re-composes it; except that the student takes compositional messing to new extremes. Rolfe virtually vivisects the hymn, proposing an ode to chromaticism and rhythmic stasis.

The violin sonata Drop (1999) is most memorable where the extended violin melody is doubled on the piano. Squeeze (1997) on the other hand starts off as a jaunty march, flavoured with a “Les Six”-like insouciance. Further on it marches right into the mysterious dreamy realm of a Bach chorale, dissolving into an unresolved tonal, harmonic and textural mistiness.

Composer Rolfe, evidently fond of bass drum thumps of all dynamic gradations, indulges his penchant in Revenge! Revenge!! Revenge!!! (1995) to dramatic effect, adding brake- and other drums for good measure.

This is a distinguished album by one of our most gifted composers of new concert music, definitively played.