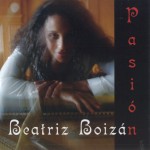 Latin American piano music is not commonly found on record. Even the Brazilian master, Hector Villa-Lobos, only sometimes gets acknowledged for his piano output. How refreshing then, that the Cuban-born Canadian pianist Beatriz Boizán has decided to change this on her debut disc. Oh, sure, there is an occasional Soler and Albeniz here, but the spirit of this album is an unbridled fiesta. The pianist has a light, precise touch that serves her well in the break-neck pace of some of the pieces, and infuses the whole with a sense of fun.

Most of the pieces will be both unfamiliar and very familiar at the same time, as they reflect the region’s tradition of rhythmic dance. Whether filled with carnival fervor or moments of whimsy, the music of Lecuona, Cervantes and Ginastera shimmers with light and colour — and of course, the “Passion” of the title. This delightful disc is a musical equivalent of sangria— a perfect accompaniment to a hot summer evening. Muy caliente!

Of the many works written for the recorder over the last century, few of the neo-classical or neo-impressionist examples ever make it onto concert programs or CDs, so it’s good to see the release of this recording. Opening the program is Richard Harvey’s Concerto Incantato, written for soloist Michala Petri in 2009. Using a variety of sizes of recorder over five movements, Harvey writes beautifully for the instrument and the piece also sweetly reflects his sensibilities as a composer for film and television. Here’s hoping that the piece receives more performances by recorder players around the world!

Following the Harvey is Malcolm Arnold’s diminutive Concerto Op.133, written for Petri in 1988, and his inclusion of winds in the orchestration makes for a welcome colour change. Gordon Jacob’s exemplary seven-movement Concerto for alto (and sopranino) recorder and strings closes the program. Written in 1957 for Carl Dolmetsch, it blends the strengths of both string and recorder worlds and is given a definitive and expressive reading here.

Conducted by Jean Thorel, the City Chamber Orchestra of Hong Kong is superlative throughout, and Michala Petri, one of the recorder’s leading figures of the past 40 years, is completely at home in this repertoire.

Danish accordionist Bjarke Mogensen is the rising young star in the accordion world. Here he performs concerto works representing four decades of composition. This is really is a “coming of age” release for both the performer and the instrument. Mogensen and the colourful Danish National Chamber Orchestra under the direction of Rolf Gupta are brilliant both in their interpretations and tight ensemble nuances.

Any serious student/performer of accordion will have tackled the accordion works of the late Ole Schmidt. Symphonic Fantasy and Allegro, Op.20 is a very early work for classical accordion. The 1958 piece draws its inspiration from Bartók and Stravinsky. Its rhythmic pulse cries out for a modern dance interpretation. Per Nørgård’s Recall (1968/1977) is a happy rhapsodic work with its many popular music harmonic and groove references.

The remaining two concertos were composed for Mogensen. The underlying “tick tock” idea in Anders Koppel’s Concerto Piccolo (2009) sets the mood in a work clearly rooted in the film score idiom. Martin Lohse’s In Liquid (2008/2010) is one of the most original works for accordion I have ever heard. Mogensen makes his brutal technical part sound so easy in this quasi minimalistic exercise in shifting fluid breathtaking sounds.

Mogensen’s strength lies in his great independence of line in the contrapuntal sections. Occasionally the higher pitches could use some added bellows support to create a fuller colour but this is a moot point. Mogensen is an artist to experience! 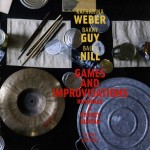 More than mere child’s play, this significant CD expands some of Hungarian composer György Kurtág’s performance pieces to evocative chamber improvisations. Taking 11 miniatures for solo piano from his eight-volume Játékok series, which translates as “Games” in English, the trio’s intuitive skills create nine exciting tracks that refer both to Kurtág (born 1926) and the wider musical world.

The high quality shouldn’t come as a surprise. Besides a career as an improviser, Bern-based pianist Katharina Weber has won many awards for interpreting notated music by contemporary composers. Swiss percussionist Balts Nill moves easily among improvised, notated and even pop music, while British bassist Barry Guy has been exploring the relationship between instantly composed and composed music for years, most notably with his London Jazz Composer’s Orchestra.

A prime instance of this occurs with Kurtág’s Playing with Infinity that’s followed by Improvisation VI. The former is built around a descending line that radiates overtone coloration as it fades away. The latter evolves at a speedy clip as the pianist’s hunt-and-peck variations evolve into a bouncy line that almost spirals out of control until steadied by Guy’s thumps and Nill’s clanks and clatter. Finally the percussionist’s metallic rim shots and the bassist’s staccato rubs presage a finale of linked arpeggios from the keyboard. Elsewhere these contrapuntal musical salutes evolve in different ways, as flapping cymbals meet intense low-pitched piano reverb; or a tremolo build up of passing piano chords is balanced with squeaking bass lines or hard objects reverberating on drum tops.

All and all the three manage to honour an underappreciated composer’s music while simultaneously creating noteworthy sound statements on their own. 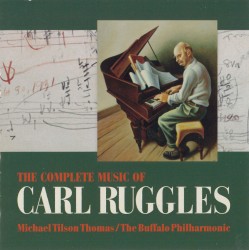 Long out of print, this double CD re-issue of the 1980 Columbia vinyl LPs of the complete music of the American iconoclast Carl Ruggles (1876–1971) makes a welcome return to the fold thanks to the efforts of the San Francisco Symphony’s Other Minds project. Michael Tilson Thomas, long-time conductor of that admirable ensemble, was also music director of the Buffalo Philharmonic from 1971–79, continuing a golden age for contemporary music in Buffalo dating back to the tenure of his predecessor, the composer-conductor Lukas Foss (1963–71).

Ruggles struggled mightily with his compositions, publishing only a dozen complete works from 1918 to 1944, amounting to a mere 90 minutes of music. Strident, granitic and densely chromatic, Ruggles’ powerful music attracted the attention of the avant-garde of the time who greatly admired his uncompromising vision. Edgard Varèse (none too prolific himself) was a major enthusiast, and used his influence to arrange high-profile performances and solicit new commissions for him. Alas, the cantankerous Ruggles was more fascinated with the process of composition than its termination and left the majority of his projects unfinished. His colleague Henry Cowell recalled overhearing Ruggles pounding out the same crystalline sonority relentlessly for hours on end, and when he gently questioned him about it Ruggles bellowed, “I’m giving it the test of time!”

Ruggles’ distinctive music has indeed passed that test with flying colours, and 32 years after their initial release these performances remain compelling despite the comparatively dated sonics. The voicing of the glowing, closely-packed harmonies in the isolated moments of quiet repose are expertly balanced and the orchestra projects the stentorian passages with chilling conviction. Excellent documentation is included. This is a landmark collection that should not be missed.

Music of Erwin Schulhoff (1894–1942) and Miecyslaw Weinberg (1919–1996) raises consideration of totalitarianism’s effects. Jewish composers escaping the Nazi terror transformed and elevated our western musical world, but what about the ones who looked eastward? New discs enhance our awareness of these wonderful artists. Born in Prague, Erwin Schulhoff developed early as a significant pianist and composer. Attempted emigration to the Soviet Union was overtaken in 1939 by Germany’s occupation of Czechoslovakia and his arrest; he died in a concentration camp. Weinberg grew up between the wars in Poland, barely escaping the Nazi invasion while the rest of his family perished in the Holocaust. He settled successively in Minsk, Tashkent and Moscow in 1943, adapting as best he could to the Soviet regime.

Schulhoff has received considerable attention in recent years; his piano works show a tasteful master integrating musical influences into original and deeply felt works. The affecting Variations and Fugue on an Original Dorian Theme (1913) reveals an already-mature composer commanding compositional forms and devices towards his expressive ends. Carolyn Weichert brilliantly captures the idioms of both modernism and jazz in Partita (1922) where 1920s dances replace Bach-era ones. Transcending clichés of decadent Weimar Germany, the depth and seriousness of its jazz scene during the 1920s and ‘30s are evident; I love the charm, quirky humour, fleeting pensive moments and glimpses beyond the ordinary in the Tango-Rag. Schulhoff’s harmony is never just “bi-tonal” or “wrong-note.” Weichert balances chords and brings out subtle voice-leadings in music evocative of the era and more. The Third Suite for the left hand is a work of pianistic genius. Weichert’s fingers crawl “multi-legged” over the keyboard; as her thumb sings out one of Schulhoff’s exquisite long melodies in the Air, fingers carry on a canonic invention below! After the harmonically-adventurous Improvisazione, she delivers the mixed-metres perpetual-motion Finale with flair but without bombast.

Miecyslaw Weinberg’s major piano works are ably performed by Allison Brewster Franzetti, some in premiere recordings. Weinberg was an excellent pianist whose creative leanings showed in his Lullaby composed at 16, which carries the genre to remarkable heights. Nazi totalitarianism threw him towards the Soviet sphere and he was strongly affected upon hearing Shostakovich’s Symphony No. 5. His First Sonata (1940) retains adventurous musical possibilities: bi-tonal passages, extreme registers, stark and dissonant sonorities. Franzetti’s performance of the magical close of the Andantino is touching, seemingly wandering into the distance before the fearsome Finale emerges. Official pressure against Shostakovich’s experimentalism forced him towards the Symphony No.5’s more “positive” idiom; comparing Weinberg’s Second Sonata (1942) to the first shows similar movement. Harmony is organized around familiar scales, the music lilts and sings. Franzetti builds perfectly towards the slow movement’s climax, and the quiet return of the opening mood is breathtaking. Again in 1948 Stalinism reared up, demanding folk-like themes and simple forms. In the Sonatina (1951) Weinberg incorporated some of these changes; unsatisfied, he revised it in 1978 as Sonata Op.49A. The effects of totalitarianism can be long-lasting.