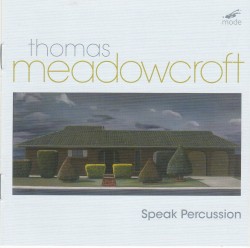 The Australian composer, Thomas Meadowcroft (b.1972), delivers a CD featuring four of his works written for percussion and electronics performed by his compatriots, the renowned Speak Percussion ensemble. In the first piece, titled The Great Knot, piercing electronic drones and chirpings create a delightfully barren expanse. This piece is a meditation in an open field with rusty swings and passing melodies in the wind. Cradles is a psychedelic lullaby warping lounge music into a hallucinogenic dreamscape. In Plain Moving Landfill, the listener travels through industrial ambiences and synthetic punctures. For a piece that is inspired by the layers of rubbish found in a landfill, this piece is decidedly calm – albeit in a Tim Hecker sense of the word. Lastly, Home Organs takes its inspiration from the attempt at memory retrieval at the onset of Alzheimer’s illness. Our memories can create a sense of “home” or belonging for the individual. This piece certainly delivers a sense of frustration that undoubtedly accompanies a loss of this sense of home through the failure of one’s own organs.

Meadowcroft has a particular knack for quirky electronic tinkering and applies these sonorities to obfuscate the difference between acoustic and electronic sources for the listener. When thinking about a CD of contemporary percussion music, the mind immediately expects to hear bombast and raucousness. This release is an extremely successful shift from the norm in its novel use of electronic auras that blend with acoustic instruments – a must listen for those seeking something unfamiliar in the world of percussion music. 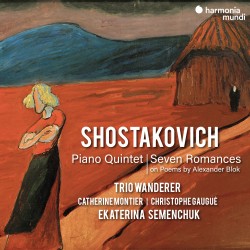 The public, generally, does not leave a performance (or a deep listening session to a recording) of the work of the late Russian composer Dmitri Shostakovich whistling tuneful melodies. But who made tuneful whistling the barometer for success in classical music anyway? Certainly not the legions of Shostakovich admirers, for whom this 2020 release – of his Piano Quintet in G Minor Op.57 (1940) and Seven Romances on Poems by Aleksander Blok Op.127 (1967) by Trio Wanderer (Jean-Marc Phillips-Varjabédian, violin; Raphaël Pidoux, cello; and Vincent Coq, piano) – will be most welcome. For the quintet, the trio is joined by violinist Catherine Montier and violist Christophe Gaugué and the Romances are sung by the commanding mezzo-soprano Ekaterina Semenchuk.

With the piano quintet, Shostakovich presents a test of technical prowess and historical understanding to the musicians, as they deftly negotiate the multiple lexicons that comprise the composer’s influences and, ultimately, his style. For example, contained within the quintet’s five-part structure (Prélude: Lento; Fugue: Adagio; Scherzo: Allegretto; Intermezzo: Lento; Finale: Allegretto) are motifs, broad musical themes and harmonic junctures revelatory of Shostakovich’s unabashed modernism (his so-called “ambivalent tonality” and deep admiration of Stravinsky), placed in compelling historical flux with Baroque gestures (counterpoint abounds, and there is even a G-major Tierce de Picardie that concludes the opening Prelude), along with the general, and lifelong, influence of Russian folk songs. This is the much-discussed polystylism of Shostakovich; the quintet handles such musical shapeshifting between genre and historical junctures with musicality, precision and seeming ease.

Equally compelling is the Seven Romances song cycle, where the great and sought-after Semenchuk, singing in the composer’s (and poet  Blok’s) native Russian, shines. A recommended recording. 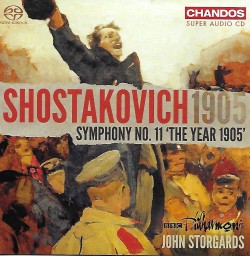 Shostakovich wrote this symphony during 1956-1957 to commemorate a horrific event from the year before his birth. On January 9, 1905 between 10,000 and 20,000 workers and their families, suffering the miseries inflicted upon them by Russia’s rush to industrialize, converged upon Tsar Nicholas II’s Winter Palace in St. Petersburg with a petition. The Tsar was not there and had left no one in the palace to receive any petition. On Bloody Sunday, the Tsar’s cavalry dutifully cut down 200 of their undefended countrymen.

If you are not familiar with this symphony, it has a program. The first movement depicts the serenity and mood of the spacious palace square. The second movement, titled The Ninth of January, begins quietly and devolves to the determined brutality and slaughter of the workers. The Tsar wins the day. The third movement contains an adagio that depicts the growing resolve within the survivors. The fourth is enigmatic. There are unmistakable overtones of an impending final confrontation, then the triumphant jubilation of the closing pages of the finale moves the listener 13 years ahead to the day that Tsar Nicholas II, the last Tsar, and his family (minus one) were themselves slaughtered. This movement is titled The Tocsin, a warning bell. Was the composer intending the finale with its statement of victory really as a reference to a historical event, or a warning of another, yet-to-be victory?

Finnish maestro John Storgårds is the principal guest conductor of the BBC Philharmonic and one of the busiest around. As the saying goes, he was born to conduct this symphony. He totally embraces the entire work from the tranquility and the real sense of open space in the opening adagio to the jubilant fourth movement. Not one note is wasted. The second movement is all the more powerful due to Storgårds’ appropriate, unhurried tempi and balances between strings, brass and percussion. He leans on the brass to powerful effect. The third movement, In Memoriam, allows Storgårds to broaden the tempo to meaningful declarations. The final movement concludes with a jubilant celebration reinforced with four sonorous church bells in the orchestra, an organ and high spirits.

The sound from Chandos is extraordinary. I was listening to the SACD layer in stereo and there were the musicians and the orchestra. I could “see” the flute, the basses, the timpani, the cellos, in truth every instrument exactly where they were in real three dimensions. But they remain in the fabric of the ensemble. No fatigue. Perfect dynamics.

Get a copy. See for yourself. 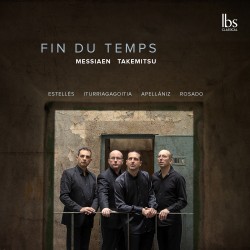 Recently, Messiaen, a Catholic mystic, has come under posthumous criticism for at least passively upholding a stance of anti-Semitism. These days it might be too controversial to even discuss the religiosity that fills his music. It’s safe to say both he and Takemitsu attempted the impossible: to demonstrate timelessness with the essentially time-bound art of musical performance.

The more recent piece almost succeeds in simulating the “Fin du Temps” proposed by the earlier. With veiled and obvious references to Messiaen, Takemitsu’s piece seems to sit still and reflect. For contrast, turn to the sixth movement of the Messiaen, and listen to the Danse de la fureur pour les sept trompettes; it’s so rhythmically exacting to perform, and so exciting. The listener is bound by time, not released. But it’s fantastic, and fantastically presented here. Overall the recording rides on the high partials generated by the four different voices, by which I mean it is bright, but never strident. Well, except as the movement closes, where apocalyptic trumpets signal the end.

One is bound to assess the performance of the solo clarinet movement: Abîme des Oiseaux. No vanity mars this performance; if there are warts in the presentation of the crescendi and diminuendi over extreme sustains, the minute wavers that mark us as human, they do nothing to diminish the clarity of intent and finely wrought performance. 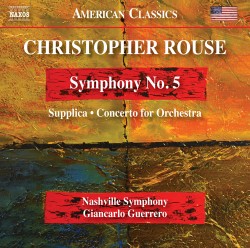 Few works carry such weighty baggage as Beethoven’s Fifth Symphony. If a composer chooses to tackle the symphonic form in their output, and further manages to compose so many as five, one can choose to ignore this baggage or attempt to meet it head on.

In his Fifth Symphony, American composer Christopher Rouse, who died in September 2019, decidedly chose the latter. With a Grammy and a Pulitzer to his name, the celebrated composer shows that he was not intimidated by large forms as the work balances tradition and modernity with impressive prowess. The listener is clearly provided with classical reminiscences while also being transported through a contemporary sensibility of vast turbulence and serene calm.

Also on the disc are two restless pieces titled Supplica and Concerto for Orchestra. The former is lyrical and tender while the latter is a true orchestral showpiece where all players of the orchestra have their chance to shine. Already being one of the most performed composers of his generation, this disc shows that Rouse’s legacy will no doubt continue on well into the future. 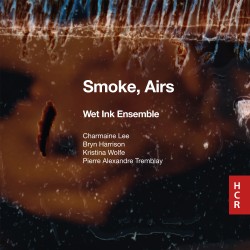 In the latest release by the renowned Wet Ink Ensemble – titled Smoke, Airs – the ensemble’s adventurousness and dedication to the music of our time is on brilliant display in four new works by three Americans and Canadian Pierre Alexandre Tremblay.

In the title track, experimentalist vocalist Charmaine Lee creates a haunting landscape of whips and sonic shadow worlds. Interesting vocal utterances paint both uneasy and beautiful atmospheres. Bryn Harrison’s Dead Time contextualizes change within a static field in a context where the composer is clearly concerned with how our ears perceive the unfolding of variation through sameness. Kristina Wolfe’s A Mere Echo of Aristoxenus is inspired by the ancient concept of aural architecture – a piece in two movements that evokes vast Greek spaces lost in time, creating a truly unique listening environment. Lastly, Tremblay’s (un)weave is a study of our contemporary soundscape: the stop and go of the urban frantic reality and how one may find solace in such an environment.

The Wet Ink Ensemble has received much critical praise in their successful history as a collective. This release will continue to heighten the group’s deserved reputation.