This CD is itself a little masterpiece: the six works on it by 20th century American composers, already recorded by many other flutists, are performed with such style, panache, and artistry that it is a welcome and justified addition to the catalogue.

The first track is the opening movement of Eldin Burton’s Sonatina. Susan Hoeppner’s phrasing is mesmerizing, to the point that I want to play this over and over again! Her interpretation of the Canzone from the second movement of Samuel Barber’s Piano Concerto is serene and measured, but perhaps a little too dispassionate. The most wonderful moments in the entire CD, for me anyway, come in the second movement of Lowell Liebermann’s Sonata Op.23. Hoeppner and Lydia Wong build on the strength of each other’s playing to come to a thrilling and almost superhuman intensity. Their performance of John Corigliano’s Voyage, while embracing the simplicity of the piece, infuses it with great sensitivity and tenderness and at times intensity that arises entirely out of the sound and colour of the flute. Hoeppner and Wong give stirring performances of the last two compositions, Aaron Copland’s lyrical Duo for Flute and Piano and Robert Muczynski’s technically challenging Sonata Op.14.

This CD brings us definitive performances of music from an ongoing “golden age” of composition in the United States, which continues to thrive in the protective enclaves of universities despite the vicissitudes of these tumultuous times. Kudos to both artists; this CD is a winner.

Tim Brady’s most ambitious composition to date must surely be 24 Frames consisting of a series of 24 movements each of which he identifies as a “frame.” Adding up to three CDs and a DVD (AM 905), it amounts to well over two hours of sometime meditatively calm and at other times challenging and exhilarating music. While a soprano voice, baritone sax, bass clarinet, viola, bass trombone and percussion make appearances one at a time in substantial though supporting roles, the through-line here is Brady’s writing for electric guitar and his masterful virtuoso playing in every section of his sprawling opus.

Indeed the 8’53” section called “Scatter – Frame 1” could easily stand as a self-contained work. Featuring the nuanced vocalise of Karen Young, her vocal performance is so densely processed at times that it becomes a virtual choir. Yet Brady reminds us that this is a human voice first and foremost, by having vocalist Young imitate a wow-wow pedal effect acoustically about halfway in. It only lasts a moment but for me it is such deft and delicate touches which impress the most in 24 Frames. At the end of this section the guitar’s distant bell-like sonorities admirably support Young’s soft cooing.

Frame 2 is subtitled “In Almost Unison” and it’s an apt description of the relentless tempo guisto and metrically complex character of the joint duo of guitar and baritone sax, marvellously played by Jean-Marc Bouchard. Frame 3 on the other hand, featuring Lori Freedman’s dramatic bass clarinet, has many more contrasting angles and emotional facets to it.

Frame 5 partners the electric guitar with bass trombone, in several sections juicily modulated with electronic effects. Indeed an outstanding aspect of this movement, as well as several others, is the astonishing range of the blend between the acoustic sounds of the instruments and their sounds electronically morphed.

The sonic shape-shifting continues in Frame 6 which introduces percussionist Catherine Meunier into the mix. She plays the vibraphone and afterward the marimba joined by Brady’s electric guitar, providing a welcome crisp contrast to several of the previous atmospheric sections, many of which did not posses a definable pulse. Here we have melodic lines, many founded on broken arpeggios, which sometimes interlock between instruments. At other moments the duo sounds in melodic and/or rhythmic unison, set in an increasingly complex metric and spectral framework. This first CD culminates in a satisfying crescendo supported by a sort of electric guitar trill stretto perhaps referencing heavy metal.

Reviewing such an immense, assured and accomplished work – and I’ve only touched on about a third of it – is truly an insurmountable challenge given the constraints of this review. I hope my listening notes have successfully reflected the scope of Brady’s fertile compositional imagination, and my own pleasure and enthusiasm for the music in his multi-CD project. 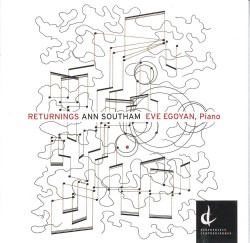 This album marks the premiere recording of four piano works by the late Ann Southam. The music was chosen by Southam, among Canada’s finest composers, who died at age 73 in November 2010. The consummate Toronto pianist Eve Egoyan, for whom the works were created, makes a convincing and moving case for them.

I first heard Southam’s music in the 1970s when she became known for the electroacoustic works she made for Toronto Dance Theatre choreographers. I was surprised to hear later that we shared a mutual composition teacher, Samuel Dolin of the Royal Conservatory of Music. In Returnings I, the piano tolls in the low register while the consonant mid-keyboard chords support a disjunct melodic line. The haunting, though reassuring, music is over well before I want it to be. It hardly seems to last the quarter of an hour the CD timing states.

In Retrospect is like a broken harmonic series rearranged, a set of cubist impressions of bells ringing, their pitches ranging over most of the keyboard. One can imagine in the listening Southam’s abstracted, distanced and terse life in review, fastidious in its avoidance of dramatic overstatement and emotional sturm und drang. While her modernist colours are on display here, by the end of the work I am left with the feeling of unquiet, unnamed musical questions being posed rather than clear statements articulated and argued.

Qualities of Consonance, in contrast, has a dramatic agenda. It serves up dissonant, aggressive, loud musical gestures that would be quite at home in the mid-20th century, alternating with soft sostenuto passages. The resulting dialectic resonates on a deep emotional level. In the final work, Returnings II: A Meditation, Southam offers us a more refined aesthetic. Set in a haltingly rocking rhythm, it revisits the harmonic grammar of Returnings I.

Yes, I hear links in these last piano pieces to the more pattern-concerned jubilant minimalism of Southam’s earlier works, yet this mature autumnal music speaks to me with more conviction. They have the admirable gravitas and serenity of a full life well lived. These pieces, along with Southam’s Simple Lines of Enquiry (recorded by Egoyan on Centrediscs CMCCD 14609), should take their rightful place in the top tier of contemporary concert piano repertoire. 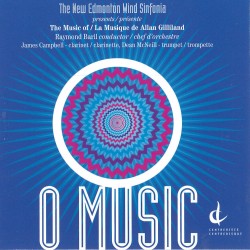 This disc by the well-established New Edmonton Wind Sinfonia contains a variety of music by prolific Edmonton-based composer Allan Gilliland. Conductor Raymond Baril maintains a high standard throughout, with soloists James Campbell and Dean McNeill making distinguished contributions. Included are jazz and Broadway suites as well as music based on the composer’s Scottish heritage. My main reservation is that, for a single-composer collection, I don’t hear enough of Gilliland’s “own” musical voice coming through.

Dreaming of the Masters I pays tribute to great jazz clarinettists including Benny Goodman, Pee Wee Russell and Buddy DeFranco. Perhaps better known as a classical clarinettist, James Campbell emerges here as also a fine jazz stylist and improviser. In Kalla (“call” in Norwegian), trumpeter and arranger Dean McNeill conveys brilliantly the role of a riverside trumpeter in New Orleans circa 1900 making echoing calls that are answered by other trumpets throughout the city (with jazz plunger mutes much in evidence). Fantasia on Themes from West Side Story demonstrates Gilliland’s inventive orchestration and idiomatic technique in what he calls a “re-composition” of material from the beloved musical. O Music, Loch Na Beiste, and Love’s Red Rose evoke the Scottish landscape and traditional melodic style. Overall, this disc would appeal to those who enjoy any or all of the above genres. 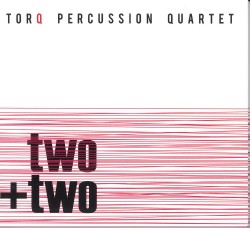 “Always complimenting or opposing” is the descriptive phrase that creative percussion quartet TorQ uses to describe the music on their debut recording project, two + two. Produced by TorQ (skilled percussionist/composers Richard Burrows, Adam Campbell, Jamie Drake and Daniel Morphy) and Ray Dillard, the CD is without question a fascinating and intense piece of work. According to TorQ themselves, their project explores harmonic and rhythmic concepts and the contrasting and complex relationships to their polar antithesis, e.g. pitched and un-pitched; tranquil and relentless; simple and complex.

two + two is comprised of five extended works, including the evocative Awakening Fire by Jason Stanford, which utilizes ephemeral vibes and marimbas, the drones of Tibetan meditation bowls and all manner of drums and percussion gizmos to create a primordial sonic landscape – replete with Neolithic thunderstorms. Also of note is the stark Tak-Nara by Nebojsa Jovan Zivkovic, and the funky, marimba driven I Call Your Name: Rescue Me (Christos Hatzis), which integrates urbanized spoken word snippets as well as some thrilling auricular cacophonies. Also moving is an ethno-centric version of iconic avant-garde composer John Cage’s opus, Third Construction.

This conceptual, non-linear and visceral music may not be everyone’s cup of tea, but it clearly extends beyond a mere auditory experience and into the realm of performance art. I’m sure that we can all look forward to the next magical multi-dimensional presentation from TorQ – highly musical percussive artistry without artifice or gimmicks. 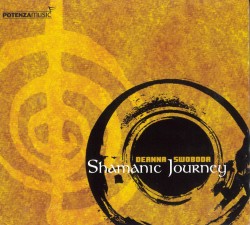 The noble tuba is the only instrument in the standard symphony orchestra that can claim that virtually all of its solo repertoire has been composed within the last 60 years. This is in large part due to the efforts of tuba players themselves, who often seek out the friendship of composers, who they then commission (or brow-beat) into composing these solo works.

American tuba player Deanna Swoboda is no exception to this: a professor of tuba and euphonium at Western Michigan University and the President of the International Tuba and Euphonium Association, she also is a fantastic performer, as this solo CD, her second, ably shows. Most of the featured repertoire is by women composers and most is of the “easy-listening” variety – a number of the works having a jazz or pop-infused feel. Particularly enjoyable is the Concert Piece for Tuba and Piano by the noted American composer, Libby Larsen.

A bonus for listeners on our side of the border is the inclusion of two works by Canadian composers, Elizabeth Raum’s Ballad and Burlesque (commissioned by Swoboda) and Barbara York’s Sonata for Tuba and Piano, subtitled “Shamanic Journey,” which gives Swoboda’s new CD its name.