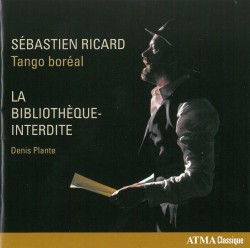 The following review is an excerpt from Editor's Corner (May 2017) which can be read in its entirety here.

Let me start with a disclaimer: I don’t get opera; I don’t like tango; and cabaret is not my cup of tea. That being said, imagine my surprise to find that the disc which has been getting the most play on my system this month is a cabaret-style “tango opera” by Denis Plante. La Bibliothèque-Interdite (ATMA ACD2 2752) features actor-singer Sébastian Ricard and Plante’s ensemble Tango Boréal in a tale set in the dark days of mid-20th-century Argentina.

“The odyssey began,” Plante tells us, “with a concert […] by Les Violons du Roy, the Tango Boréal Trio and actor Sébastian Ricard. Its theme: Jorge Luis Borges. I had been commissioned to write tangos to accompany the poetry of Argentina’s great literary figure for the production. Sébastian Ricard captivated the audience as, pacing like a caged tiger, he played several roles […] One year later I suggested to Sébastian that we continue the experiment in musical theater by creating an original show, La Bibliothèque-Interdite [The Forbidden Library]. I wanted to present an impressionistic portrait of tango at the end of that Infamous Decade [which began in 1930 with the military coup that overthrew President Hipólito Yrigoyen and lasted until 1943 when another coup resulted in the rise of Juan Perón]. I have long been fascinated by this period – and by the fact that, sometimes risking their lives, it was the gaucho minstrels and tango enthusiasts, the payadores and the tangueros, who first denounced the rise of the fascists…”

Plante has created a libretto that is “a confession, a life story and ideological speech” sung by a fictional poet. Although this character sprung from the composer’s imagination, it is also based on stories told by his father-in-law Alfredo Monetta, “an Argentinian exile who barely escaped the genocide of the dirty war of 1976.” He goes on to say “Other memories are my own. I discovered the neighborhoods of Buenos Aires in dramatic and violent circumstances: blinded by tear gas during the crisis of the pot-banging protests of December 2001.”

So what does this all sound like? It begins with Eden, a languidly nostalgic song – I often dreamed of a library with secret doors…it was my childhood and my destiny: I became a poet – that gives way to Inspecteur Barracuda, a harder-edged portrait of the prince of the renegades, the nabob of tango. [Translations mine.] There are 16 contrasting movements, each with their own story from Icarus’ Descent and a Bestiary to ruminations on departures, memory, silence and life. The instrumentation is simple and clean, featuring bandonéon (Plante), nylon-string guitar and charango (David Jacques) and acoustic bass (Ian Simpson), with occasional added percussion and small chorus. Stylistically it is a pastiche, as freely admitted by Plante, with moods that vary from ballad to narrative to dance-like, including of course more than a fair share of tango.

What struck me most however was the clarity of Ricard’s vocals. I studied French throughout public and high school plus several post-secondary summer immersions, and although I cannot carry on a fluid conversation in la belle langue, I am able to read fairly sophisticated texts en français (my summers always include reading a least one French novel in the original). But listening to art songs or popular music in French I often have trouble following the lyrics. So I was immediately hooked when I realized that I could understand la plupart of what Ricard was singing, thanks to his clear diction and to Plante’s careful setting of the texts. I was reminded of the vocal writing of John Weinzweig, oh not in the musical language, but in the careful selection of words that could be clearly understood when sung.

The booklet notes include a dedication paragraph and, as quoted in part above, a “Diary of Creation” by Denis Plante, a foreword by Sébastien Ricard, a poem by Brigitte Haentjens and artists’ biographies, all in both official languages. Strangely the libretto only appears in French, leaving me glad of all those years I put in building my vocabulaire. Highly recommended.