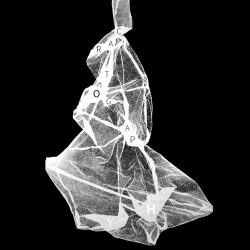 The following review is an excerpt from Editor's Corner (June 2017) which can be read in its entirety here.

Raging Against the Machine may be the title of the last CD discussed, but the phrase could apply equally, or perhaps even more appropriately, to Eric Wubbels’ composition gretchen am spinnrade which opens Mariel Roberts’ latest CD Cartography (New Focus Recordings fcr185 marielroberts.com). As a matter of fact I had to go online to watch a video of a live performance (at icareifyoulisten.com) to see whether or not any machine-like technology was in use. With the composer at the piano and Roberts on cello it is amazing to realize that the excruciating intensity is being generated in real time by two mere mortals. It is truly a sight, and sound, to behold, with what Wubbels describes as “alternating relentless motoric circuits with plateaus of regular ‘idling’ motion.” After repeated listening and viewing it is still not clear to me whether the microtonality in the piano part as the piece progresses is a result of the frantic banging on the keys, or if some of the notes have been specially (de)tuned in advance. Whatever the case, Gretchen is definitely pictured at a particularly post-industrial spinning wheel in this reinterpretation of Schubert’s original.

By way of respite, Aman by Cenk Ergün is a much quieter offering, but one that does involve live electronics by the composer along with Roberts’ solo cello. While it was the intensity and sheer volume of Wubbels’ scoring that made the sounds seem mechanical in gretchen, here it is the sparseness that makes them unfamiliar and somewhat otherworldly. It is as if we are “listening” through a microscope to the very structure of the sounds. It’s often hard to distinguish between the manufactured sounds and those created by extended techniques on the cello. I look forward to seeing a video of this one or, better yet, the chance to see Roberts in live performance.

George Lewis’ Spinner for solo cello veritably bursts forth after the quietude of Aman. Lewis, Edwin H. Case Professor of American Music at Columbia University, is also a renowned trombonist who has worked with the Association for the Advancement of Creative Music for more than four and a half decades. Spinner is set in a more traditional mode for a virtuosic solo instrumental work, at least in the sense of the post-war avant-garde. It is a compendium of sounds available to the cellist using bow and fingers on the strings of the instrument, without venturing into the various extra-musical extensions sometimes called for in the context. It is a thoroughly musical work, which effectively integrates some aspects of modern jazz without compromising its status as a concert piece.

The disc concludes with The Cartography of Time by New York-based composer Davíð Brynjar Franzson. The program note includes a definition of cartography (map-making) and time (the indefinite continued progress of existence…) and a quotation from Wittgenstein, none of which sheds much light on the piece, but I do find its progress glacial and textures reminiscent of an Icelandic landscape or, in my wife’s ears, Northern Lights, perhaps linked to the composer’s birthplace, Akureyri, on the north coast of Iceland just south of the Arctic Circle.

All in all, Roberts’ disc is an incredible journey. Fasten your seatbelt and pack your parka, but be forewarned, although it begins with a bang!, it ends with a whisper…