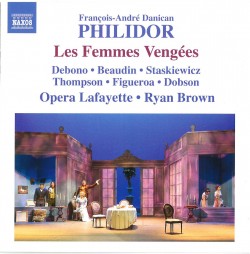 Like the Singspiel in Germany and Austria and the Ballad Opera in England, the 18th-century French opera comique used spoken dialogue. These works were rather lightweight until Mozart’s Magic Flute and Beethoven’s Fidelio brought a new seriousness to the Singspiel. As for the opera comique, it was not until Bizet’s Carmen (1875) that the full potential of the genre was revealed.

François-André Danican Philidor, now perhaps better known as a chess player than as a composer, wrote a number of comic operas. Although it is good to have a recording of Les femmes vengées (1775), there are problems with its presentation. The booklet that comes with the CD carries a synopsis of the plot but no libretto. There is a note saying that the text can be accessed through the Internet, but, when I tried to do so, I received a reply that the libretto is not yet available. Clearly Naxos wanted the disc to be reviewed as early as possible but it was a mistake to send out review copies before it was possible to consult the text. Moreover, the CD contains only the music of the opera, not the spoken dialogue. I understand the reason for this: the inclusion of the dialogue would have meant two CDs and doubled the cost. But the effect of this is that we do not have the opera here but a series of ariettes and vocal ensembles.

Opera Lafayette, a company from Washington, D.C., was founded in 1995 and specializes in French opera ranging from Lully to Felicien David. They have a recorded a number of works, all on Naxos, including Philidor’s Sancho Pança. The singing on this recording is good and the artists include three Canadian singers: Pascale Beaudin (soprano), Antonio Figueras (tenor) and Alexander Dobson (baritone). I know Beaudin from a summer course at CAMMAC a few years ago: she is a fine singer and an outstanding teacher. She has previously recorded a disc of songs by Francis Poulenc, part of a five-disc set of Poulenc’s songs (ATMA). Dobson is well-known from his appearances in Toronto theatres and concert halls. It is good to find him in this international context.