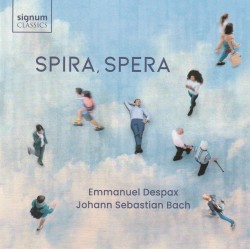 In the liner notes to the terrific 2021 release Spira, Spera, the name taken from Victor Hugo’s novel The Hunchback of Notre-Dame, French pianist Emmanuel Despax writes that studying and performing the music of Johann Sebastian Bach is metaphysical in that “there is no chaos, just beauty.” Most certainly, during these trying times, humanity’s quest for beauty is, if nothing, unabated. As such, I would suggest (expanding on this point) that Bach’s music – particularly when played as beautifully as is captured on this wonderful recording – is an equivalently metaphysical journey for engaged listeners. Perhaps this sounds trite, but beauty is the antidote to ugliness. And sadly, there is tremendous ugliness in society and in the world at present. Beauty, and beautiful artifacts, such as the music of Bach as performed boldly and with nuance by Despax, hold out the possibility of something (a beauty ideal?) towards which we aspire.

Although much of the music contained on this disc may be familiar, the arrangements and album concept (paying tribute to the legacy of pianists and composers – Liszt and Busoni among others – who both revered Bach’s music and transcribed it for the contemporary piano) is both unique and musically satisfying. The whole recording is sublime. Even on such workhorses as Jesu, Joy of Man’s Desiring, Despax finds freshness in Dame Myra Hess’s transcription and brings to life beautiful musical subtleties that, of course, were always contained within, but needed the deftness of touch and recording sensitivity that Despax and this album offer, to reveal themselves anew. 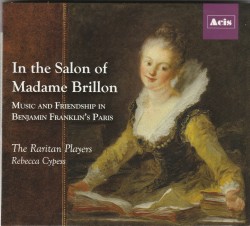 This inspired new recording from the noted Raritan Players was conceived and directed by pianist and scholar Dr. Rebecca Cypess, and is the result of arduous research and performances. The project is focused on the pre-Revolutionary War Parisian hostess, patroness and composer, Anne-Louise Boyvan d’Hardancourt Brillon de Jouy (1744-1824), and on both her musical canon and the sparkling workings of her fabulous, fashionable and elite Parisian salon. Her luminous guests were drawn from the rarified worlds of music, art, philosophy and diplomacy – including her flirty pen pal Benjamin Franklin (then U.S. Ambassador to Paris).

There are seven world-premiere recordings here, which include Brillon’s duet for harpsichord and square piano (performed on a rare 1780 English instrument by Johannes Zumpe). All selections have been performed on period instruments and feature not only Brillon’s work, but music preserved in her personal collection, including compositions dedicated to her by the iconic cellist Luigi Boccherini.

Of particular beauty in this heady bouquet are Boccherini’s Sonata No.4 in D Major from Sei Sonate di Cembalo e Violino – particularly the Andante, which explores the gorgeous and unexpected, natural sonic symmetry of the violin and harpsichord. Brillon’s own Sonata No.4 in G Minor is a fresh-sounding and compelling work, and in the Andante con espressione, the square piano resonates with passion and urgency – engulfing the length of the keyboard. Henri-Joseph Rigel’s three-movement piece for piano and harpsichord, Duo No.2 in C Minor is a spine-tingling celebration of musical possibilities.

Constrained by the societal restrictions of her day, Brillon, who nearly disappeared from history, manifested an international life of artistic and historical significance that still resonates today. 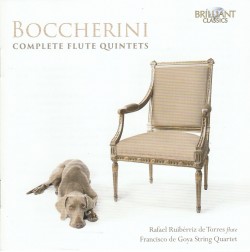 Virtuoso cellist and composer, Luigi Boccherini, born in 1743 in the city of Lucca in Tuscany, Italy, only 92 kilometres west of Florence, received his musical education in Lucca and subsequently in Rome. He spent some time in his mid-20s in Paris, which led to his moving to Madrid and his appointment as a musician in the household of the Infante Don Luis, brother of King Charles III.

It was there in 1773 and 1774 that Boccherini composed the two sets of Six Flute Quintets Opp.17 and 19, recorded on the first two CDs of this three-CD set. The third CD is of the Flute Quintets Op.55, composed in 1797, either in Spain or in Berlin, where he was employed by King Frederick William II of Prussia.

These 18 quintets, while far from Boccherini’s total output, reveal a very skilful and original composer, different from but not inferior to his much better-known colleagues, Haydn and Mozart. First and foremost is his gift for melodic invention, evident in everything on the CD, even in the third set, composed when he was in his mid-50s.

The performers are the Spanish Francisco de Goya String Quartet and flutist, Rafael Ruibérriz de Torres. The quartet’s playing is technically flawless, and their sensitivity to each other and to the flute is exemplary. Ruibérriz de Torres always sounds as if he belongs, and his facility on the period instrument is astounding during the virtuoso passages. Bravissimi to the five for giving us this first complete recording of these hitherto neglected works. 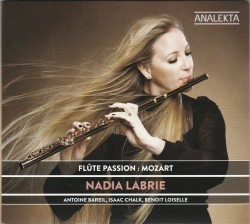 Mozart’s dislike of the flute has long been a topic of controversy, and whatever truth there may be behind the theory, some of his most charming works were written for the instrument, albeit the result of commissions received between 1778 and 1787. Five of these compositions – the Quartets K285, 285a and 285b in addition to the Quartet K298 and the renowned Andante K315 (as arranged and adapted by François Vallières) are presented here on this delightful Analekta recording performed by flutist Nadia Labrie and her accomplished colleagues Antoine Bareil, violin, Isaac Chalk, viola and Benoit Loiselle, cello. First-prize winner from the Conservatoire de musique du Québec, Labrie holds a master’s degree from the Université de Montréal and has appeared as soloist with such ensembles as the Orchestre Symphonique de Québec and the Vienna Chamber Orchestra. This is her third in the Flute Passion series.

These one-, two-,  or three-movement works – never more than 17 minutes in length – may have only been written for the purpose of financial gain, but after 250 years they remain miniature gems – amiable chamber music where all parts are deemed equal.

As a cohesive ensemble, this group of four succeeds admirably!  From the beginning, the listener is struck with the wonderfully intimate sound these musicians produce. Labrie’s pure and sonorous tone is perfectly complemented by the underlying strings that provide a sensitive partnership. This is nowhere more evident than in the second movement of K285b, a theme and six variations. Here, the artists approach the graceful intertwined melodies with great finesse, achieving a delicate balance throughout.

Félicitations à tous! This is a wonderful performance of engaging music played by four gifted musicians. Whatever feelings Mozart may have had for the flute, he would surely have approved! 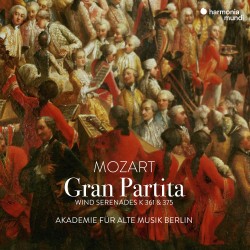 Alte is German for “old,” perhaps leading one to imagine fustiness, cobwebs or creaking joints. The Akademie für Alte Musik invert the age of the music, making old sound new, in their release of two of Mozart’s beloved Wind Serenades, K.375 in E-flat Major and K.361 in B-flat Major (known affectionately as the Gran Partita). I imagine the players wearing some fashions of the later 18th century, shoe leather worn by the cobblestones of Vienna, marvelling at and revelling in the sounds they are called on to make by the newly written score; some probably in need of a bath, wishing their masters paid more, hoping to avoid cholera.

This music is never old, no matter how often it’s reworked. The playing is so damned fine that every moment is a joy, conjuring the freshness that Mozart inserted into the charming form of the Serenade during its moment of popularity. Ever the canny businessman, he wrote the second of these entertainments “quite carefully” to catch the attention of a wealthy potential patron: Emperor Joseph II. Wind players and their audience are much the richer for his efforts.

There’s some oddness of pitch, owing to the use of period instruments; the bassoon sound in particular is quite special. The ensemble colours are fresh and juicy, the phrasing and articulation precise. These performances rank among the finest recordings of this material I’ve heard. Bonus delight: the audible breath upbeats beginning each track. 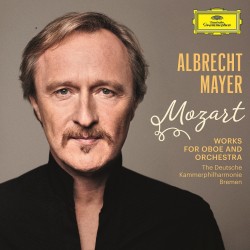 The new Deutsche Grammophon album Mozart consists of six works transcribed for oboe, oboe d’amore and English horn, including a completed version of the first movement of the unfinished Oboe Concerto in F Major, expertly performed by internationally renowned solo oboist of the Berlin Philharmonic, Albrecht Mayer and the Kammerphilharmonie Bremen chamber orchestra. Comprised of a thoughtful selection of works originally for soprano, violin and flute, Mozart showcases Mayer at the top of his craft.

The fragmented and unfinished concerto movement was commissioned to be completed by Mayer’s friend, Swiss composer Gotthard Odermatt. Keeping with the style and flare of Mozart, the fragments were imagined by Odermatt into a delightful, charming and convincing first movement. Another highlight is one of Mozart’s most recognized masterpieces, the Concerto for Flute and Harp. Transposed to the key of B-flat Major, it was arranged for oboe and harpsichord, featuring Vital Julian Frey. The choice of the harpsichord was a unique and effective substitute for harp, fitting perfectly with the timbre of the oboe. It is truly an elegant performance.

With the addition of Ave verum corpus performed on English horn, Exsultate, jubilate and Ch’io mi scordi di te performed on oboe d’amore as well as the Rondo in C and Ah se in ciel, benigne stelle performed on oboe, this album really is a “best of” collection featuring the entire oboe family.

The Kammerphilharmonie Bremen follows and matches the elegant, tasteful phrasing of Mayer, highlighting the mastery of the instruments and his clear love of Mozart. 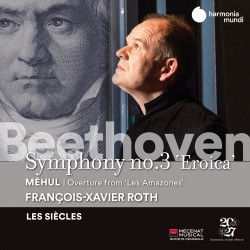 Beethoven’s Eroica is a revolutionary work; “not only in physical scale, but in spiritual content it surpasses all classical symphonies written before.” It completely broke away from the world of Haydn and Mozart, his former principal influences.

It was like a breath of fresh air in the world of music at that time. As it was written not long after the French Revolution and at the time of Napoleon as a “liberator against tyranny” (his words) Beethoven initially dedicated it to Bonaparte. That spirit prevails and the work throbs with élan and heroism in the glorious key of E-flat Major, especially in the first movement. It’s full of invention, breaking traditional forms and even has such powerful dissonant fortissimo chords that the players at the premiere concert refused to play!

That was in the summer of 1804 conducted by the young Beethoven, but now in the 21st century it’s in the hands of a revolutionary conductor, creator of the revolutionary orchestra with period instruments, Les Siècles. François-Xavier Roth has the ability to enter the composer’s mind and capture the essence, the spirit of heroism, the dash and urgency throughout the work. Tempo is fast, but most likely the composer’s original intent, the symphonic argument and all details are crystal clear. I actually saw Roth conducting the Scherzo and how simply and easily he induced a tremendous intensity and concentration into the players and what remarkable precision and lightness he achieved. The last movement is tremendous. It’s fast but the orchestra is so precise that all details of the mad Romani episode and the final apotheosis of the Prometheus theme come out magnificently. The overall effect is simply overwhelming.