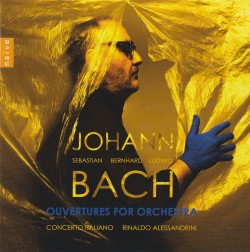 How pleasant to explore music by relatives of Johann Sebastian Bach other than his sons. Johann Ludwig was a third cousin of Bach, Johann Bernhard a second cousin. On this CD, they each contribute an Ouverture to accompany the four by the Bach.

So is Concerto Italiano’s choice justified? The works by the two cousins are substantially shorter than the great man’s. Yet listening to them shows how highly enjoyable they are: listen to the Rigaudons and Gavotte en Rondeaux in Johann Bernhard’s Ouverture-Suite in E Minor.

Then there is Johann Ludwig’s contribution to the CD, namely, his Ouverture in G Major. This is even shorter than Johann Bernhard’s work but much more spritely. The movements all ask to be danced to, whether or not they actually were at the time. Indeed the Ouverture by Johann Ludwig could even be played as background music at any event, no matter how formal.

And so to the four Orchestral Suites by Johann Sebastian. From the movement which opens the CDs (the Ouverture to the Orchestral Suite No.3) there is a complexity to Bach’s composition which marks him out for the composer he was. Real demands are made on the string-players, an aspect repeated throughout the four Suites. It is quite clear that by Bach’s time the movements named after French country dances were well advanced from their original rural simplicity.

Although his own writing shines through on these CDs, the sleeve-notes state how much Johann Sebastian respected his two cousins. The beautiful pieces selected by Concerto Italiano and their sheer vivaciousness demonstrate why. 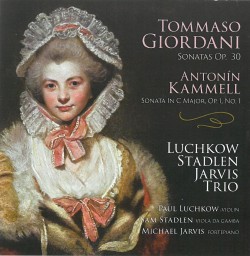 The viola da gamba’s persistence in late-18th-century England owed something to the aristocracy. It appears that Lady Lavinia Spencer (1762-1831) was the gamba-playing dedicatee of this CD’s Giordani sonatas, and yes, she is a direct ancestor of the late Princess Diana Spencer and sons William and Harry! From a musical standpoint gamba players could by then hold an equal role in sonatas for violin, viola da gamba and fortepiano, such as the Three Sonatas, Op. 30 (published c.1782) by Naples-born, later Ireland-based, Tommasso Giordani (c.1738-1806). The textures Giordani achieves through familiarity with the gamba’s high register liberated the instrument from bass-playing, allowing imitation and echoing between instruments and octave doubling of melody in the violin and gamba, for example in the opening movement of Sonata No.2 in D Major. I find this to be the best of the sonatas, with a particularly fine slow movement; Giordani was a natural melodist whose use of contrasting minor keys and quiet fortepiano solos is notable. His active gamba part in the finale illustrates the instrument’s development towards virtuosity.

The Canadian Luchkow-Stadlen-Jarvis Trio is convincing, with clean solo and ensemble playing free of affectation, with attractive tone and balance, and expressive inflections in the slow movements. And although the Sonata in C Major, Op.1, No.1 by Czech composer Antonin Kammell (1730-1785) that ends this disc has other requirements – ornamentation, accentuation and hairpin crescendos – they meet those demands equally well. 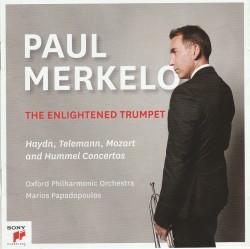 With repertoire spanning the Baroque through the classical eras; Telemann through Haydn, Leopold Mozart and Hummel, The Enlightened Trumpet showcases the bona fide genius of Paul Merkelo, principal trumpet of the Orchestre symphonique de Montréal. After his epic confrontations with Baroque Transcriptions and French Trumpet Concertos, Merkelo deftly combines trumpet and strings in the incisiveness of Haydn’s Concerto in E-flat Major (Hob.Vlle.1) with its famously breathtaking Allegro finale, the not inconsiderable demands of which he takes in his stride.

Merkelo then nimbly navigates his way between the rhetoric and energy of Telemann’s Concerto in D Major (TWV 51:D7) and Leopold Mozart’s Concerto in D Major for trumpet, two horns and strings with appealing melodiousness and – in the second instance – robust interplay with the other horns. The performance of the Hummel Concerto in E Major (S.49) sees its melodic ingenuity projected with due vitality, as well as a stunning degree of spontaneity and expressive poise redolent of Maurice André, Merkelo’s legendary predecessor to whom he has been likened. Not without good reason, as this disc attests.

The crowning moments come during the Rondo finale of the Hummel, the cadenza of which has been credited to Timofei Dokshizer. By then, of course, Merkelo has already made his mark, through a bracing workout across three other famous trumpet concertos, with heartfelt eloquence worthy of the reputation he has gained among his trumpet-playing orchestral peers across the globe. 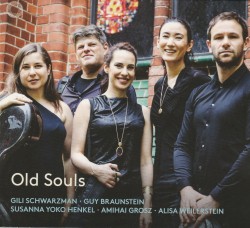 This recording of four works, transcriptions of two solo violin pieces and of two string quartets, in which flutist Gili Schwarzman plays the solo part in the solo pieces and the first violin part in the quartets, presents the reviewer with the double challenge of considering both the arrangements and the performances.

The arranger is Guy Braunstein, a former concertmaster of the Berlin Philharmonic Orchestra, and now a soloist, conductor and arranger. He is also Schwarzman’s husband. His skill as an arranger, deeply informed by his knowledge of the violin, is formidable. The first composition on the disc, Beethoven’s Violin Sonata No.4, is a masterful orchestration for flute and string quartet. Braunstein did not merely assign the notes of the piano part, according to their pitch, to the corresponding instruments, but rewrote it for string quartet. One could be forgiven for assuming that it was an original composition by Beethoven himself.

The performances are energetic and nuanced, models of musical artistry. My favourite moment in the entire CD is the second movement of Dvořák’s String Quartet Op.96, which sounds absolutely natural played on the flute. The long, languorous melodic line, as played by Schwarzman, is never rushed and at the same time, never loses energy.

So it is great having this recorded new take on some well-known chamber music. Now let us hope that Braunstein’s arrangements will be published. 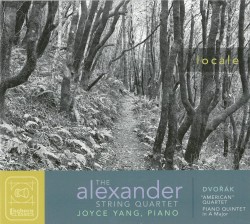 If I was asked to describe Dvořák’s chamber music, I would say it has the characteristics of an abundant ball of energy, the one that brings joy no matter what and is enriched by the occasional touch of Slavic melancholy. The Alexander Quartet and Joyce Yang seem to be particularly attuned to that joy – here is a recording of exuberant energy and vitality that never crosses the line of being too much.

The “American” quartet is probably one of the most beloved pieces in the chamber music repertoire and it shares a number of similar elements with the Piano Quintet Op.81, thus making it a perfect pairing for this album. Although they were written some years apart and on different continents, both pieces are wonderful creations of a showcase of rhythms, dramatic gestures and, above all, memorable melodies, all of which are tastefully presented by the artists on this album. What I find the most pleasurable is the intricate tapestry of textures created by the Alexander Quartet. Their playing brings forth the elegance and lavishness of 19th-century Europe yet it does have a slight contemporary edge in terms of expression. Joyce Yang is on fire here – she displays a perfect interpretational balance between virtuosic agility and grandiose statements so typical for piano music of the Romantic period. Together they make this recording unapologetically exciting. 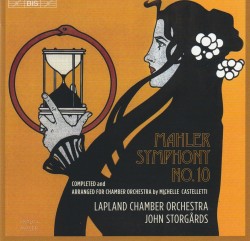 When Gustav Mahler died in 1911 at the age of 50 he left behind sketches for his tenth and final symphony. Of the five movements, we have Mahler’s full scores of the first and third movements with the remainder in an abbreviated short score format. These preliminary sketches, skeletal though they may be, define the entire melodic structure of the work. In this sense Mahler’s final testament is less unfinished than unrealized. It was not until the mid-1920s that efforts were made to bring the symphony to light with the publication of Ernst Krenek’s edition of the first and third movements and the release of a facsimile edition of the sketches. Numerous subsequent efforts have been made to refine the other three movements; the most successful of these has proved to be the “performing version” by Deryck Cooke first heard in 1960.

Over 30 recordings of the complete work in various versions have been issued since. This new chamber orchestra arrangement, by the Maltese conductor and musicologist Michelle Castelletti, is an exceptional accomplishment, quite brilliantly executed by the phenomenal John Storgårds and his Lapland Chamber Orchestra. I was initially quite skeptical that an orchestra of a mere 24 players (single woodwinds, a lone trumpet and horn, 14 strings, piano, harmonium, harp and percussion) would prove adequate to convey the impact of the 100 musicians Mahler normally employed. I was mistaken; even in these reduced circumstances the pathos of Mahler’s message still shines through in Storgårds sublime interpretation. This ranks as one of the most exciting and accomplished performances I have heard in my lifetime of terminal Mahleria. 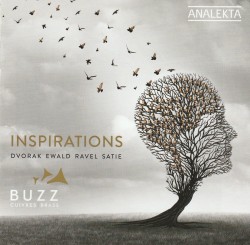 Inspirations is an attractive recital with each of four gems in this repertoire being polished to a glittering sparkle. This is the work of two Québécois arrangers, François Vallières and Hugo Bégin who – judging by these inspired re-imaginings – certainly ought to be better known than they might be in Québec. The imaginative arrangement of Satie’s Gymnopédies ought to be proof enough. But if there needs to be further evidence of highly original musical transcriptions, there is also proof in the transformations of Ravel’s String Quartet in F Major (Op.35) and Dvořák’s String Quartet No.12 in F Major “American” (B.179). All are highly creative re-arrangements; wholly satisfying both structurally and expressively.

The Buzz Brass parley with the familiarity of old friends, yet their playing always retains the sense of gracious etiquette associated with noble academies for which this music was no doubt originally intended. Nothing is forced, exaggerated or overly mannered; tempi, ensemble and balance all seem effortlessly and intuitively right. The brass sound is lucid. These are, in sum, sincere and poised accounts, a fitting tribute to the faultless character of the original music of the composers.